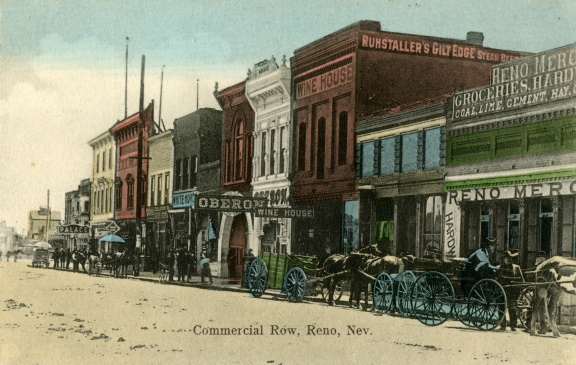 Among these enterprises lining Commercial Row circa 1906, the Louvre sits to the immediate left of the Oberon. The Louvre is notable for its distinctive Gothic arch, with which A.L. Mason and B.F. Bailey replaced the iron pillars in 1903, when they assumed ownership of the saloon.

A snapshot of six early years of one popular gambling-saloon in Reno, Nevada spotlights some of the problems these establishments routinely faced: on-site crime, financial troubles, crooked games and changes in both owners and gambling operators.

Though the Louvre debuted in May 1897* at 22 E. Commercial Row in the then-called Marshall Building, it wasn’t until 1900 that any gambling associated with the enterprise was mentioned in the local newspapers. All earlier Louvre reports touted its unique beer offerings, fine cigars, music and lunches, but this new news brief was that “two new games are running there.” One was faro, the other one, unknown, perhaps craps.**

Thus, we begin our presentation of events then, just after the turn of the century, when the firm of Robinson & Matson owns the Louvre and remodels its interior.

October: Burglars attempt to rob the Louvre’s safe, but it doesn’t go as planned. They successfully blow off the door with explosives but fail to penetrate the inner vault. They abort their plan. 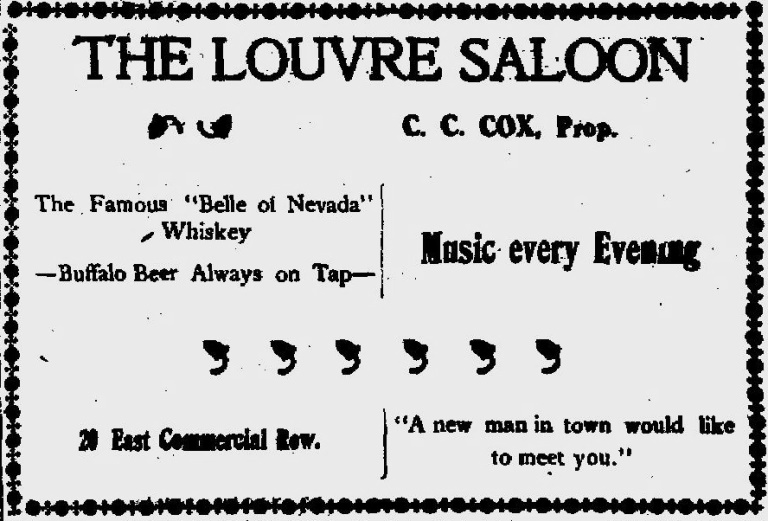 June: While playing faro in the Louvre, a 59-year-old man, Frank Fusselman, dies from a heart attack.

September: Bailey retires, leaving Mason to run the Louvre on his own.

November: Bert and Grant Crumley take over running the gambling and upstairs bar.

December: Leading up to Christmas and then, New Year’s Day, the Louvre gives away a turkey to every patron who pays 10 cents to spin the Big Wheel.

April: Charles Dreyer, proprietor of the adjoining Oberon gambling saloon, secures the top floor of the Louvre. (His plan is to combine it with the Oberon’s, creating one large space in which to offer gambling, but he never does).

May: Charles Stout and Mart Johnson take over management of the Louvre. Stout has a stake in Reno’s Arlington Hotel. Johnson is the proprietor of The Ingleside roadhouse and former co-owner of the Palace Hotel, both in Reno.

June: The Louvre bank goes broke, and Stout and Johnson temporarily shut down the faro and craps. They restart them the next day, though, with a new, $20,000 bank roll.

September: Stout and Johnson again close the Louvre’s games, this time due to a dissolution of the duo’s partnership. Johnson bows out.

October: At the Louvre, a former Reno department store clerk, Joe Mitchell, cashes some checks, for which he has no money.

“The change is of interest to Reno and Nevada sporting circles on account of the prominent part taken by the new owners in square games,” reported the Nevada State Journal (March 30, 1906).

This quote suggests someone was operating crooked games at the Louvre. It may have been Johnson, given the local newspaper described him once as “the ‘smooth’ man of the Louvre” and given he stepped down seemingly over a disagreement with Stout (Reno Evening Gazette, Aug. 11, 1905).

* The Louvre ended its run in 1939 when it became the Martin Hotel Bar.

** In 1900, Nevada allowed some forms of gambling, only these games: faro; monte; lansquenet/rouge et noir; keno; fantan; 21; Diana; stud poker; red, white and blue; and banking games (ones in which there is a fund against which all players may bet). Per state law at the time, any and all commercial gambling had to be conducted in an establishment’s back room(s) so that passersby out front wouldn’t see, through the windows, the action inside. State legislators amended this statute in 1903 (see ***).

*** The new version of law required that gambling establishments in more populous Nevada counties (in which at least 2,000 votes had been cast in the previous general election) confine games of chance to their location’s second floor.