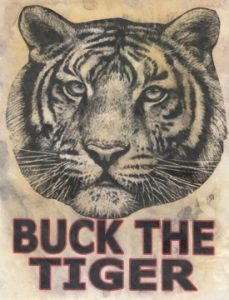 The hottest game in the Old West between 1825 and 1915, faro is pretty much extinct in the United States today.

If you’ve never heard of it — and you aren’t alone there — it’s a fast-action, one-deck card game in which innumerable players compete against a bank rather than one another. (Learn the rules of faro and play.)

The game, also called farobank, has been around since the Middle Ages, but the version played in the U.S. sprang from 17th century France. Le faro is French for “pharaoh,” taken from the picture on the back of the cards used in the game.

Faro grew in popularity during the 19th century in America where, oftentimes, dealers traveled with their equipment, offering a bank for games where they could.

It was a common pastime in The Silver State’s mining towns, such as Virginia City. Nevadans referred to it as “bucking the tiger,” which derived from the picture of a tiger displayed on walls outside saloons denoting a faro bank inside.

During Prohibition, much of gambling nationwide went underground. Whereas most games resurfaced after ratification of the 21st Amendment in 1933 — poker, blackjack, slot machines and more — faro didn’t.

“Despite its long history, in modern times even references to the game of faro have all but disappeared. For example, books, Western films, and popular Western TV shows of the 1970s all disregarded faro in favor of poker,” wrote the authors of In the Pursuit of Winning.

Faro lived its last days in Nevada. By the 1950s, only a few casinos offered it. One was the Horseshoe Casino in Las Vegas, which made the game available through 1955. People could play it in Reno until 1958 at the Ramada Hotel Casino and until 1964 at the Golden Hotel.

Too Little Profit
What led to faro’s demise? Primarily, the small house edge on it, experts speculate. Ultimately, casinos preferred games that afforded them a greater margin. Because faro favored players more than any other game of chance, they could win a lot, as the following quote suggests.

“The men who “buck the tiger” are waxing fat these days,” reported the Nevada State Journal (Oct. 20, 1904). “It is stated that there is not a gambling house in town that is making money. This is not because the games are not being played, for every night the rooms are crowded and each table is surrounded by eager players. The fact is the players are winning, steadily.”