Unable To Provide An Alibi 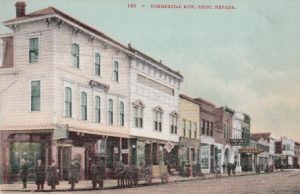 Allegedly, two days earlier, Edwards, with two other masked men, entered the Oberon, a saloon and gambling house in Reno, Nevada, in the early Sunday morning hours and, wielding revolvers, ordered the casino workers to hand over the cash at one of the faro tables and line up against the wall. The trio then backed out, and ran in different directions.

Police spotted Edwards and fired several shots at him. The robber shot back until his gun was empty then surrendered. He had on his person about $300 (roughly a $1,000 value today), the amount said to have been stolen from the Reno hot spot.

Edwards, who hailed from Germany and was 27, declared he was innocent. He claimed he’d been walking across the Virginia Street bridge when police officers had accosted and shot at him, so he simply had run and returned fire to defend himself.

To get the suspect to name his accomplices, the district attorney offered to drop one of the two charges against him — 1) robbery and 2) assault to murder — which could mean a life sentence were he convicted of both. The stubborn thief, though, wouldn’t rat out his colleagues.

Not the Best Witness
Four months after the robbery, Edwards’ trial began. (The D.A. wound up dropping the other charge anyway.)

Because the defendant acted shiftily throughout the proceedings, one deputy sheriff sat within a few feet of him and another was stationed at the exit because they thought he might try to flee.

Edwards testified he’d come to the United States when a child, had grown up in St. Louis, was a waiter by profession and had worked in various eastern and western states. Explaining the $300 in his pocket, he claimed he’d had $210 when he’d arrived in Reno a short time ago and had won more than another $100 while gambling.

As for the night of the robbery, he claimed the following: He’d played at the Louvre, the Oberon and the Palace, checked in at the Overland hotel then visited Chinatown. On his return, two men had tried to stop him and because he’d had money, he’d fired at them and had run. Having been followed earlier in the day by some guys who’d seen him show his money, he’d thought they were back to rob him. Then officers had taken him into custody related to a holdup, a mystery to him.

On cross-examination, the D.A. asked the accused why eventually he’d surrendered to the police. The reason, he said, was because he’d realized he’d be “unable to provide an alibi” (Reno Evening Gazette, July 18, 1906).

Apparently sealing his own fate with that statement, the jury, in under 20 minutes of deliberation, returned a unanimous guilty verdict. Judge Benjamin Curler sentenced him to 20 years in the Nevada State Prison and said he believed Edwards wouldn’t hesitate to commit murder to achieve an end.

“I think that you are a desperate man and that you are past reforming,” he added (Reno Evening Gazette, July 20, 1906).

A Time of Unrest
The following year, an appeal of Edwards’ case was pending in the Nevada Supreme Court. On November 18, a Monday, the convicted robber and two other convicts were working in the prisoner dining room, Edwards with a carving knife, each of the other two with a revolver (presumably they’d gotten them smuggled in somehow).

Richard Forrest was serving 10 years for attempting to kill two police officers in Reno. James Watson was doing 11 years for robbery in Elko.

A little after 3 p.m., the three broke into the nearby kitchen. When a deputy investigating the source of the noise appeared, they immobilized him.

Forrest crawled through the small opening used to pass food to and from the guard’s dining room which was empty. Edwards and Watson pushed the deputy through it then followed him.

Rather than leave the building, as they then were free to do, they barged into the room where a guard watches the prison keys and armory, full of revolvers, rifles, and ammunition. Pointing his gun at the guard, Forrest demanded he give up the keys. When he refused, the prisoners closed in on him. Edwards sawed at the guard’s neck, trying to sever his head. The guard sustained gashes on an arm and a leg during the melee.

On the Lam
“By this time a general commotion prevailed about the prison, and the three convicts, fearing a general onslaught, ran out the front door,” reported the Nevada State Journal (Nov. 19, 1907).

Edwards took the guard’s gun with him. Outside, the butcher’s delivery wagon sat unattended. The trio jumped in and rode off.

At the time, Edwards/Forrest/Watson’s breakout was the second largest in the prison’s history (the biggest had been in 1871).

A Hunt Was On
The alarm was telephoned in to Carson City, word spread quickly and a search for the men began. When a group of armed men espied the criminals and approached, the escapees jumped out of the wagon and fled into the sagebrush and up a mountain.

Found first were Wilson and Forrest, who surrendered passively. About an hour later, Edwards was spotted lying amid the desert flora, a bullet hole in his forehead. The wound had been self-inflicted.

State of Nevada vs. John Edwards was struck from the court calendar.