Mobster Ties: Blessing and Curse for Gambling Conglomerate (Part I) 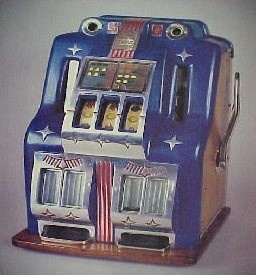 With assorted help from Mobsters starting in 1963, a small Chicago, Illinois-based pinball game maker, which had begun as Lion Manufacturing Co. in the 1920s, grew into the world’s largest slot machine developer, Bally Manufacturing Corp., by the 1970s.

And those underworld relationships later would damage its image and jeopardize some of its existing operations overseas and expansion plans for Nevada and New Jersey.

“Bally Manufacturing is one of the National Crime Syndicate’s more visible operations,” Pacific News Service reporters wrote in a May 24, 1974 article (The Capital Times).

Mafioso Investors
Lion/Bally Founder Raymond Moloney, Sr. died in 1957, after which his sons, Ray, Jr., and Don took control of the business as president and director of sales, respectively. By 1962, the company was foundering. To help, Sales Manager William T. O’Donnell contacted Abe Green, reported front man for Gerardo “Jerry” Catena, then underboss of the Vito Genovese crime family in New York. Catena’s company, Runyon Sales, was involved in pinball distribution in New Jersey, New York and Connecticut and was Lion/Bally’s largest distributor.

Together, the following group bought Bally for $1.2 million ($10 million today), incorporated it and ousted the Moloneys:

O’Donnell took the helm of Bally in 1963 with primarily East Coast mobsters as its investor-owners.

Mob-Linked Employees
• Dino Cellini: He was a top lieutenant of gambling chieftain Meyer Lansky and sold/distributed slot machines for Bally between 1964 and 1973 in London then the Bahamas and Europe, the Middle East and Africa. He sold the machines on behalf of the group of Mobsters, including Lansky, who owned the Colony Club in London, of which Cellini was the manager and actor George Raft was the front man. Prior to that, Cellini had worked in the 1950s for Lansky at his Riviera casino in Havana.

• Michael “Mickey” Wichinsky: He had connections with Catena and other unsavory men during his hugely successful stint as Bally’s slot machine distributor in Southern Nevada beginning in 1964. Wichinsky’s nephew, Robert Petrin, was married to Catena’s daughter, and Petrin held a stake in one of Catena and Green’s enterprises, Automatic Merchants Co., in New Jersey. When Nevada gambling authorities appeared for a random audit of his Bally enterprise in 1971, Wichinsky telephoned Petrin.

Wichinsky admitted having business or social contacts with and/or catering to various alleged Mobsters, such as Cellini, whom he helped land a job representing Bally in Rome. Wichinsky, however, denied ever knowing or being affiliated with Catena.

• Joseph D. Testa, Jr.: This Chicago Mobster and reported close friend of Felix “Milwaukee Phil” Alderisio, Outfit enforcer and hitman, claimed to be selling slot machines for Bally in Australia, but O’Donnell denied that was true when government officials there confronted him about it. Australian gaming authorities spotted Testa in Sydney several times, the first in 1969, sometimes in the company of local mobsters. As such, regulators concluded Testa was there on behalf of one or more U.S. syndicates to strong-arm into and monopolize their country’s slot machines industry.

Mobs’ Funding Vehicle
The Teamsters Union’s Central States, Southeast, Southwest Areas Pension Fund, or Teamsters Pension Fund (TPF): Known as the Mob’s bank, the TPF was a major source of capital for Bally, providing it with a series of loans.

After Bally went public in 1968, the TPF itself and several of its trustees bought shares in the corporation. When the TPF loaned $12 million to Bally in the early 1970s, supposedly to finance building of the corporation’s first major Chicago plant, several fund trustees held Bally stock. They included International Brotherhood of Teamsters President Frank Fitzsimmons, Vice President William Presser and TPF Asset Manager Alvin Baron.

When other individuals pursued financing through the TPF for hotel-casinos, the trustees allegedly pressured them to buy the slot machines for their resorts from Bally. This was because “Bally’s 42,000 slot machines in Nevada casinos bring in over $250 million [$1.3 billion today] a year, helping the National Crime Syndicate make payments on hundreds of millions of dollars in loans the Teamsters Central States Pension Fund provided for casino construction over the last 15 years,” wrote reporters Lowell Bergman and Dee Stevens (The Capital Times, May 24, 1974).

Downsides to Affiliations
Bally’s relationships with organized criminals repeatedly dogged the corporation, first becoming a problem in 1969 when it applied with the Nevada Gaming Commission to assume distribution of its slot machines in Nevada.

Read more about the repercussions in Mobster Ties: Blessing and Curse for Gambling Conglomerate (Part II).

* Emprise would be indicted in 1972 with Detroit Mobsters Michael Polizzi and Anthony Zerilli on charges of trying to obtain a hidden ownership of the Frontier hotel-casino in Las Vegas.

** Dino Cellini and Meyer Lansky also would be indicted in 1972, in Florida for conspiring to receive almost $200,000 ($1.2 million today) that players lost at the Colony Club in London.