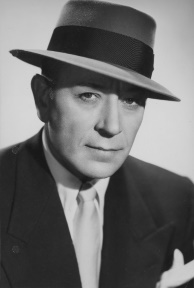 Having grown up in New York’s Hell’s Kitchen with various mobsters-to-be — Meyer Lansky, Joe Adonis, Frank Costello and others — he remained cordial with them throughout adulthood.

He had deeper relationships with two, first Owney Madden, who’d encouraged him to try acting, and later Benjamin “Bugsy” Siegel, when they both lived in Southern California.

Life had taken this gentleman in a different direction than that of his childhood peers. He became a famous Hollywood movie star, best known for his portrayals of underworld characters, such as Frank Rio (Al Capone’s bodyguard) in Scarface (1932). His film career spanned three decades, the 1930s, ’40s and ’50s.

When that was winding down, he shifted industries and worked in the one dominated by the likes of his syndicate friends: gambling. 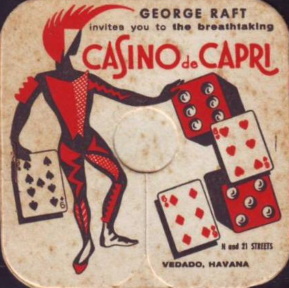 Pearl of the Antilles
Starting in spring 1958, at the age of 62, Raft served as the host and entertainment director for the Casino de Capri at the Hotel Capri in Havana, Cuba, then a newly built, luxurious, 19-floor hotel with a rooftop swimming pool.

A group headed by Charles “The Blade” Tourine, a caporegime for the Genovese crime family in the U.S., operated the casino; Lansky took a cut.

The job, however, was short-lived. At the start of 1959, revolutionaries overthrew then Cuban dictator Fulgencio Batista. Fidel Castro immediately took power and quickly closed the casinos.

The Great Wen
His next similar gig, beginning in 1966, was as the debonair, personable host (and front man) of the Colony Club in London, England, a plush and hugely successful casino there.

“All that was required of him at the Colony Club was to play the role of George Raft — a role that he had lived for many, many years,” Lewis Yablonsky wrote in George Raft, noting that a sign above the property read, “George Raft’s Colony Club.”

Various members of the U.S.’ National Crime Syndicate co-owned the business as overseen by Lansky, and numerous Englishmen owned stock in it. Lansky’s American associate, Dino Cellini, also a co-owner, managed the casino, for which London mobsters, Reginald and Ronald Kray, dealt with and kept out troublemakers.

“The Colony Club became the ‘in’ place in London, the place to see and be seen,” Yablonsky wrote. “Frequent guests were Elizabeth Taylor and Richard Burton; Ari Onassis and Jackie Kennedy; former Supreme Court Justice Earl Warren; and Charlie Chaplin.”

Raft’s stint at this gambling house also ended abruptly, in early 1967, when the secretary of Britain’s Home Office revoked Raft’s residency permit, thereby deporting and prohibiting him from returning, due to his alleged associations with U.S. underworld denizens. Along with Raft, England banned seven other Americans that year, including Lansky, Cellini and Tourine, all without any sort of due process.

The country had legalized gambling as recently as 1960 and wanted to get and keep out the mobsters from the States who’d infiltrated it since. Despite attempts to get the ban on Raft lifted, it remained in place for the duration of his life.