Teach Monkeys to Gamble, How Do They Then Behave?

Home / Casino History / Teach Monkeys to Gamble, How Do They Then Behave? 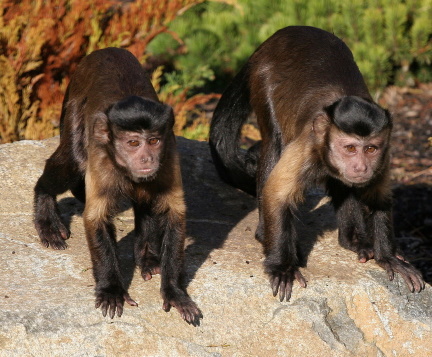 Fay and Jessica were young, capuchin monkeys living on the University of Nevada, Las Vegas (UNLV) campus, where two professors in the department of psychology intended to teach them how to gamble, in the late 1970s. (The female primates were named after actresses Fay Wray and Jessica Lange, who’d starred in the successive King Kong movies.)

Through their work with Fay and Jessica, Dr. Terry J. Knapp, now a UNLV emeritus professor of psychology, and the late Dr. Charles Rasmussen, a physiological psychologist, endeavored to learn more about gambling behavior, including the circumstances under which the monkeys would gamble and what the gambling would lead to.

They based their study on renowned psychologist B.F. Skinner’s view on gambling. He purported that the variable ratio schedule of reinforcement, or the intermittent unpredictable nature of wins in the case of gambling, motivates people to persist in the activity for long stretches with little or no payoff.

Knapp and Rasmussen chose monkeys for the research because it seemed more feasible to carry out than on people gambling in a casino.

The Methodological Plan
First, the professors would teach Faye and Jessica to press a bar in their cage for a nickel. Then they’d teach them the nickel has value, that they could spend it, for an apple piece or a look in the mirror. Then the researchers would introduce gambling; they’d teach them that instead of using the nickel for the rewards they knew, they could put it in a gambling machine and either lose the nickel or gain more nickels.

“Just to demonstrate gambling behavior will be a step that hasn’t been demonstrated before,” Rasmussen said (Las Vegas Sun, Oct. 2, 1977).

The Unexpected Outcome
Knapp and Rasmussen successfully got Jessica and Faye on a token economy, in which they earned nickels for bar pressing and could spend them in several ways, although it took some doing. (A big challenge initially was getting the monkeys to not immediately toss away the nickels after realizing they weren’t edible.)

The study was at the point where gambling would be introduced when Faye and Jessica died unexpectedly, about six months apart, due to indeterminate causes. Their demise curtailed the research before any conclusions could be drawn.

“[It was] a sad ending for us as we became very attached to them,” Knapp said in a written interview. “We never followed up with other monkeys as new federal lab requirements made it nearly impossible except for [at] primate research centers.”

Monkeys and Money
Decades later, in the 2000s at Yale University, behavioral economist Keith Chen taught seven tufted capuchin monkeys to use money to see how they would behave with it.

They demonstrated an ability to economize, to respond to cost fluctuations and to gamble. Interestingly, when presented with two choices of chance with the same odds, but one presented as a potential loss and the other as a possible win, the research subjects preferred to gamble on the latter.

“Capuchins’ choice both is very sensitive to changes in prices, budgets, and expected payoffs and, to a lesser degree, displays both reference dependence and loss aversion,” Chen concluded (Journal of Political Economy, 2006).  Reference dependence is the concept that people evaluate outcomes relative to a reference point and then classify gains and losses. Loss aversion is the theory that people prefer avoiding losses to getting equivalent gains.

Overall, the subjects of Chen’s research demonstrated behavior like that of their human counterparts.

“When taught to use money, a group of capuchin monkeys responded quite rationally to simple incentives; responded irrationally to risky gambles; failed to save; stole when they could; used money for food and, on occasion, sex,” wrote reporters Stephen Dubner and Steven Levitt (The New York Times, June 5, 2005).

Photo from freeimages.com: by Scott Liddell