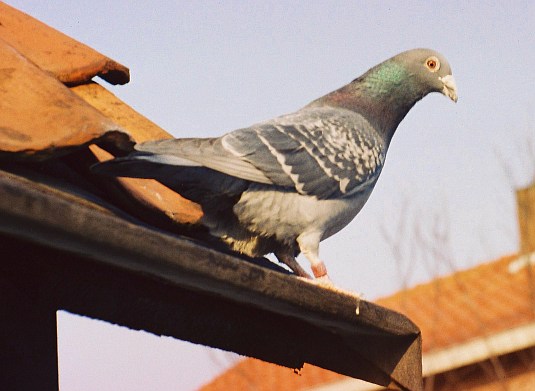 Two New York Police Department plainclothesmen arrested a pigeon that then was forced to spend the night in the Bronx police station. Five other such birds, on the lam, were wanted. Two men also were apprehended.

The capture went down on the roof of a tenement house. When officers approached the human suspects, they noticed one of them was holding a closed paper bag. They instructed him to open it, and when he did, two pigeons flew out. Each policeman went for a bird. One pigeon was caught, and the other got away.

All three suspects, Homo sapiens and Columba livia domestica, were believed to be policy runners. Policy, also called numbers, was an illegal type of gambling then, popular in poor and working class U.S. neighborhoods, in which bettors guessed the numbers that would be drawn randomly at a future time and wagered on their choices. Runners carried the gambling slips and money between the various betting spots and headquarters.

The human runners used the fowl to transport the tickets, secured by a band around their leg, from several outposts to a clearinghouse. The pigeons delivered them to that building’s roof, of course.

“You’re wasting your time, boys,” he said to them. “You only get credit for one hour at a time.” He explained how the meters worked and their purpose.

One of the British servicemen said, “We wondered why it didn’t pay off. We thought it was an American gambling device.”

When police raided an illegal gambling den in Kingston, one of the players present swallowed the dice. In court after his arrest, the judge gave him 30 days to “digest” and produce the dotted cubes.