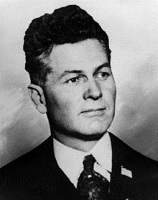 As what the Los Angeles Times called the “the first sally in the greatest campaign that has ever been waged for the elimination of gambling” (April 7, 1913), Los Angeles Chief of Police Charles E. Sebastian offered a $100 reward ($2,500 today) for information that led to the arrest and conviction of anyone operating an illegal casino in the city.

One existing operation in particular was being run in a prominent hotel and another in a well-known office building, both downtown. Officers had had difficulty procuring evidence to convict the proprietors of these enterprises because entry solely was by introduction.