Against a backdrop of sagebrush and dust in Nevada’s early, remote mining towns, saloons drew men for drinking and gambling. That combination, along with contrarian/antagonistic personalities, sometimes led to disputes that turned violent.

Here are three stories in which tempers, as fiery as the summers, got the better of men and ended in grim, sometimes fatal, outcomes.

After having dinner with a woman, W.S. Field played roulette at the Oberon saloon. He nearly had lost all his money when the game ball traveled the wheel and stopped without having fallen into a pocket. Field requested a do-over.

The dealer refused, and an argument ensued.

The drunken faro banker, Joe Belcher, who had “the reputation of being a bad man,” ran over to the roulette table and cold-cocked Field several times on the neck and jaw with a 0.38-caliber derringer, the final blow firing and breaking the weapon (Nevada State Journal, Nov. 2, 1904). The bullet lodged in Field’s right temple, half an inch from his eye. Fortunately, he survived.

Belcher was charged with intent to kill. In the preliminary hearing, he admitted to assaulting Field but his pistol going off was accidental, he hadn’t meant to kill him.

The judge, however, bound the perpetrator over for trial. In the interim, he was held in the county jail as he couldn’t make bail.

In late October, the case took an unexpected turn. Field drove to Verdi, Nevada with the woman with whom he’d dined at the Oberon and got into a heated dispute with her there, during which he stabbed her several times. He disposed of the knife and hopped the first train westward.

The following month, with Field, the complaining witness, out of the state, Belcher was released on $600 bail.

A few weeks later, Field returned to Sparks, thus the trial was scheduled for February 1905.

With the court proceedings finally underway, Belcher was called but didn’t appear. He’d forfeited bond and had gone on the lam. Law enforcement’s immediate attempts to find him failed.

Coski, a miner, was dealing. All but Lowe folded, but Armstrong stayed and announced he’d just seen Coski deal himself a card from the deck bottom. Armstrong, “quiet, self-possessed and gentlemanly on all occasions,” proposed the pot be divided between Lowe and Coski and the matter dropped (Las Vegas Age, June 27, 1915). Coski, though, who was known to be argumentative, refused, threatened them and yanked the pot his way.

Armstrong said he wouldn’t tolerate cheating and pushed him back. Coski, a former prize fighter, began to climb over the table to get at 60-plus-year-old Armstrong. The latter drew a six-shooter and clocked Coski on the head with it. Coski grabbed Armstrong’s wrist and once more tried to get at him. Armstrong fired. The shot passed through Coski’s hand and into his chest. When that didn’t stop him, Armstrong fired again, causing Coski to slide back off the table and onto the floor, dead.

Armstrong’s trial took place in Las Vegas in mid-October. It lasted a week, with 19 witnesses for the defense and three for the prosecution testifying. His attorney argued Armstrong had acted in self-defense.

The jury agreed and found him not guilty. 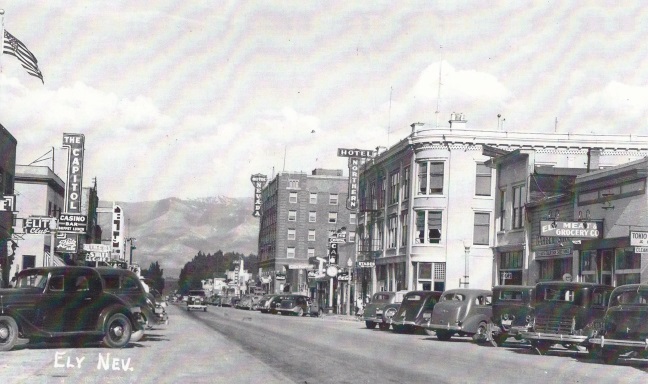 The men began to bicker, supposedly over a previous gaming deal. Doyle threatened to retrieve his gun from outside, return and kill Clifford. Doyle left.

Then he returned. Clifford wasn’t in the building, though, so Doyle began chatting with the proprietor, W.L. Tuck, at the bar.

When Clifford appeared and resumed his spot behind the roulette wheel. Doyle drew his 0.44-caliber weapon, aimed and fired, but as he did so, Tuck grabbed his arm, causing the bullet to veer off target and hit only the roulette table. During the brief struggle between them, Doyle got off a second shot, which again hit the furniture.

The shooter was charged with assault with intent to kill and later released on $2,500 bond.

At the preliminary hearing, Doyle’s attorney, J.M. Collins, filed a motion for dismissal of the charges because his client was intoxicated at the time of the incident.

In September, the justice of the peace bound Doyle over for trial. However, before that could take place, another attorney for Doyle, Joe McNamara, successfully got the original charge vacated. He’d argued that the preliminary hearing had been conducted illegally in that:

In October, Doyle was charged with the lesser infraction of maliciously firing a gun in a public place. He pleaded guilty, and the judge fined him $25 plus $25 for costs (a total of about $875 today).