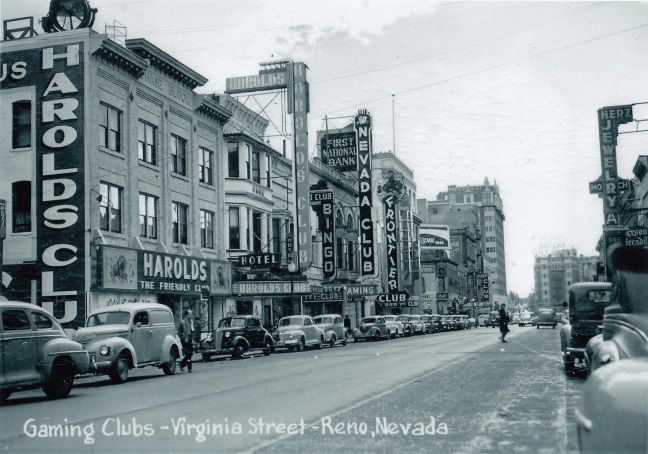 Harolds Club bustled on Christmas Eve in 1947 with revelers enjoying the gambling and camaraderie when an unexpected event instantly silenced the din. Panic followed.

Since the previous morning, Reno, Nevada police had been trying to locate a suspect: white male, approximately 20 years old, 5 feet 8 inches, 150 pounds. He’d robbed two taxicabs at gunpoint — one for $17 and one for $5 (about $184 and $54 today, respectively) — and had failed a third attempt.

At around 12:30 a.m., detective sergeants Francis Quinn and James Franklin spotted the alleged criminal entering Harolds Club. They followed him inside, where they informed patrolman William Reeder, working his regular beat there, of the situation. The three quickly fanned out then closed in on their target.

“Take your hands out of your pockets,” Quinn ordered.

The young man shot at the officers. All three fell, wounded. They didn’t fire back for fear a bystander might get hurt. Meanwhile, casino guests darted under tables or ran. Amazingly, none was hit.

Pursuit of Fugitive
The suspect fled out the door. He got into a taxicab and after riding for a few minutes, pulled a gun on the driver (who hadn’t heard about the shooting), robbed him of $20 ($216 today) and got out.

About an hour later, 15 policemen, sheriff’s deputies and FBI agents traced the gunman to a used car lot where they cornered him. Again, he tried to shoot his way free, but that time a gun battle ensued. A bullet entered his shoulder and another grazed his head behind his ear. At that point, he gave up willingly.

He was arrested and processed then taken to the local hospital for medical treatment.

The culprit, Bobby Carter, originally was from Kentucky. He’d deserted the Navy a few months earlier, having abandoned his post in an Eastern state. He’d gone to Reno from San Francisco.

Of the hurt police officers, Franklin suffered the severest injuries as a bullet entered his abdomen, ruptured his spleen, passed his internal organs then lodged in his back. Reeder sustained a gunshot wound to his hand and an abrasion on his torso. Quinn was hit in the right thigh. Physicians said they expected them all to recover fully.

Punishment Delivered
In January of 1948, Carter was found guilty of assault with a deadly weapon with intent to kill and was sentenced to a prison term of 1 to 14 years. (Strangely, at the time, the penalty for shooting someone was more lenient than that for grand larceny; 1 to 14 years was the maximum punishment for assault with the intent to kill whereas 2 to 14 years was the minimum for grand larceny!)