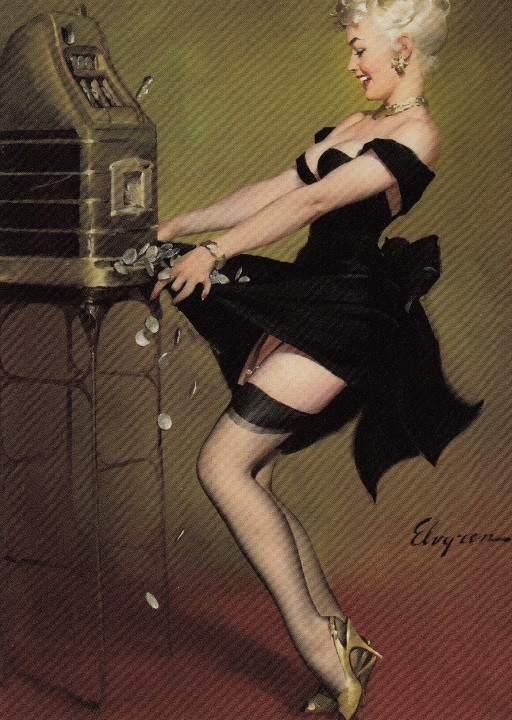 A shill, as later defined by the Nevada gaming authorities, is: “an employee engaged and financed by the [gambling] licensee as a player for the purpose of starting and/or maintaining a sufficient number of players in a card game” (Regulation 23).

Another type of decoy is a proposition player — “a person paid a fixed sum by the licensee for the specific purpose of playing in a card game who uses his own funds and who retains his winnings and absorbs his losses.”

During the mid-1900s in the Silver State, a shill’s purpose was twofold: to entice others to play by making it appear winning was more likely than it truly was and to spur or keep action alive at game tables. In 1954, the pay for such a job in Reno was $5 a day.

In Northern Nevada, shills most often were female. Oftentimes, they were married, residing in Reno for the requisite six weeks to be awarded a divorce and wanting to earn some money in the meantime.

Occasionally, though, they were male.

“Once in a while to liven things up, a gambling house will employ a man shill and give him $10,000. With this bundle, the man shill will up and roar and scatter large bets,” wrote columnist Stan Delaplane about Reno casinos (Reno Evening Gazette, May 6, 1957).

Casino management worried shills would succumb to temptation and steal money, so they enforced strict rules to prevent theft.

“You can tell a shill by the way she stacks her silver dollars,” Delaplane added. “They stack them five on edge, five flat and so on, so the pit boss can see exactly how much money she has at a glance. The lady shill is told to play only $1 at a time. If the game is dice, she must play only the Do Pass line.”

Female shills were prohibited from carrying a purse or wearing clothing with pockets. When reaching for a cigarette or handkerchief on their person, they had to rub their open palms together first to show they were empty.

Reeled Them In
Later, in 1979, the Silver State instituted Regulation 23, mandates with respect to gambling decoys, the use of which remains legal today (unlike in most other states). They are:

• Shills may only wager chips or coins.

• All of a shill’s winnings must be wagered or turned in to the card room bank at the end of play.

• When asked, casinos must identify the shills and/or proposition players on the floor.

• Casinos must display a sign saying Nevada casinos allow the use of shills and proposition players.

• Shills cannot play in such a way that disadvantages the other players.

• Gambling licensees must maintain employee records on all of their shills/proposition players.

Stakes players — “a person financed by the licensee to participate in a game under an arrangement or understanding where by such person is entitled to retain all or any portion of his winnings” — are prohibited.