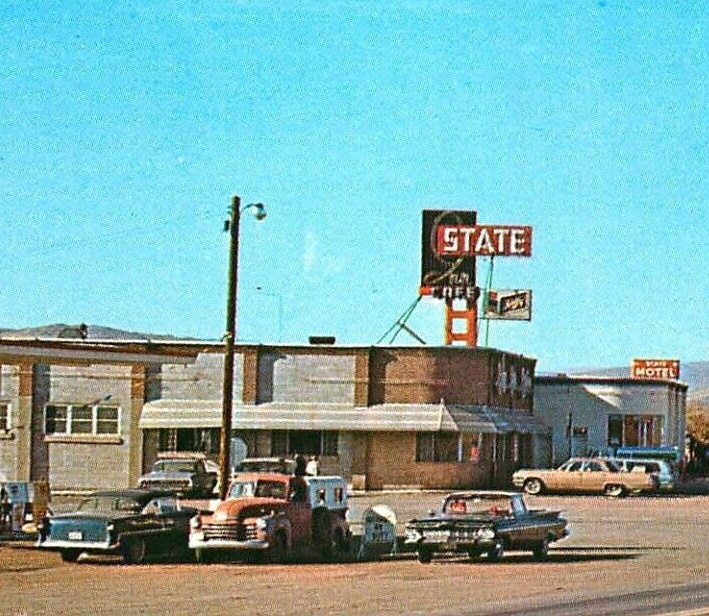 Gino Quilici just had been granted a gambling license in August 1952 for the State Inn, in the small city about 270 miles northeast of Reno. Only three months later, the Nevada Gaming Control Board (NGCB)* found on the premises two illegal, “plugged,” three-reel, mechanical slot machines.

A $1 machine, sitting in the bar area, contained a percentage changer, or “jumper,” on the center reel, which prevented the three reels from showing a jackpot. A $0.50 machine in the café had a jumper on the right reel, preventing a jackpot and three other payoffs.

Quilici, who’d emigrated from Italy to the U.S. at age 15 in 1914, had owned the State Inn as well as the State Hotel, also in Carlin, since 1947. He’d held a gambling license for the hotel since 1950. His criminal record contained one conviction, for violating Prohibition in 1925 and for which he’d served 30 days in jail.

Made to Answer
At the hearing before the Nevada Tax Commission concerning the rigged slot machines in February 1953, Quilici testified that he’d bought the ones in question from someone in another state and hadn’t known they’d been tampered with.

The tax commissioners suspended Quilici’s gambling license for the State Inn for 15 days. This meant that for that period he had to turn around and keep his slot machines facing the wall. Presumably, Quilici complied. He was warned that next time the penalty would be more serious.

Events at that meeting set a precedent for how Nevada’s gambling regulators would, from that point on, deal with rigged slot machines cases. They’d impose a short suspension for first and minor offenses and longer suspensions or license revocation for second or large offenses. Previously, the agency had turned over the matter to local law authorities. In those instances, the cases oftentimes were dropped because prosecutors couldn’t prove the operators knew their slots were cheating customers.

Lesson Not Learned
Quilici tested the commission’s new policy six years later when NGCB agents again discovered a problematic slot at the licensee’s State Inn in April 1958. This time it was a $0.25 machine with a plug on the center reel, which kept a certain symbol from showing.

In this second incident, Quilici didn’t get off so easily; he was arrested. The machine was confiscated for possible use as evidence in court, if the case wound up there.

In fact, it did. Quilici stood trial in October. Again, he claimed ignorance. In less than 30 minutes, the jury found him guilty of allowing operation of a plugged slot at the State Inn. The judge fined him $1,000 (about $9,000 today).

The next month he had to answer to gambling regulators for this violation of the state gambling law. During that proceeding, Quilici resorted to the same defense. The tax commissioners revoked his gambling license for both the State Inn and State Hotel.

Tough, Economic Consequences
A gambling license revocation wasn’t for life in many cases, so a once-licensee could reapply for another one. Quilici requested a new license about seven months later, for eight slot machines at the State Inn and another eight slots at the State Hotel. The tax commission refused to grant him one due to his conviction on a gambling charge.

A month later, Quilici applied for a license for table games at the Star Hotel and Bar in Winnemucca, another of his properties.

“The application was deferred because the present operation did not indicate that he could handle another one,” it was recorded in the August 1959 NGCB meeting minutes.

In yet another effort, Quilici applied for the 16 slots total for his café and hotel, and in December, he, with his attorney, argued his case before the NGCB. Quilici stated he’d studied up on slot machines and now knew enough to determine whether or not they’ve been doctored.

The board indicated it needed additional time to research and consider his case and, thus, deferred action on the repeat offender’s application.

Subsequently, in January 1960, on the NGCB’s advice, the tax commission refused Quilici a new gambling license on the basis of his previous license suspension and revocation.

A Different Tack
In July, instead of Quilici, Elijah I. Puett, owner of Puett Appliance Co. and a lifelong Carlin resident, applied for a gambling license for eight slot machines at the State Inn. The two businessmen had come to an arrangement wherein, in part, Puett would lease the machines from Quilici for $12.50 ($110) apiece each month, and Quilici’s employees would service them. It’s probable that Quilici also was to get a percentage of the earnings from the slots.

The commissioners denied Puett’s application with no prejudice to him, a man the NGCB agents found to be “of good character” (Meeting Minutes, January 1960), and cited Regulation 3.020, Section 1, as the reason.

That rule read, “The commission or the board may deem that premises are unsuitable for the conduct of gaming operations by reason of ownership of any interest whatsoever in such premises by a person who is unqualified or disqualified to hold a gaming license, regardless of the qualifications of the person who seeks or holds a license to operate gaming in or upon such premises.“

When it came to getting a new gambling license, like the people who’d played his plugged slots, Quilici wouldn’t hit a jackpot.