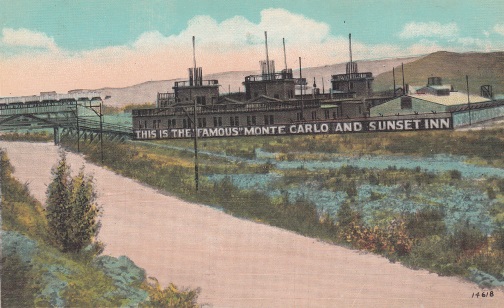 With various state bans on gambling and, later, a nationwide prohibition against liquor, many Americans, particularly wealthy Southern Californians, traveled to casinos in Mexican border cities to play and imbibe.

“The great hegira* is in, and already these towns are filled to the limit with throngs of the thirsty, willing to pay big sums for the pleasures banned by law on American soil,” reported the Reno Evening Gazette (March 30, 1920).

Here are some casinos that lured U.S. citizens across the border to do what they legally couldn’t at home:

“The destruction of the Owl leaves one large gambling house in Mexicali, a Chinese establishment where many of the games are beyond the ken** of the average American,” reported The Bakersfield Californian (Feb. 10, 1920).

“The project stood Cantu an even million dollars before a wheel turned,” noted the Reno Evening Gazette (March 30, 1920).

“American cupidity has enriched the gamblers of Augua [sic] Caliente more than $4 million in the past 10 months. The Old West in its heyday never saw such gambling as is being done at Augua Caliente these days,” reported The Kokomo Tribune (June 7, 1929).

The end of Prohibition curtailed the throngs of U.S. citizens visiting Mexico for pleasures.