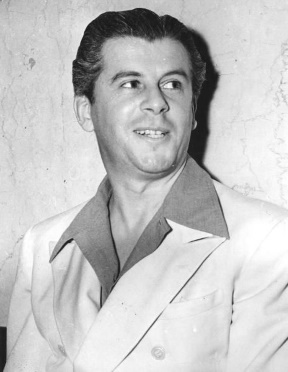 Allen Smiley “was one of the most powerful gangsters in [California],” wrote author Gerald Horne in Class Struggle in Hollywood, 1930-1950. He was Benjamin “Bugsy” Siegel’s partner and best friend and subsequently, Johnny Rosselli’s* right-hand man.

Somewhat in the shadow of these famed men and a private person, his story is less well known. So It Really Happened! unearthed these 10 interesting snippets about him.

1) Allen Smiley, né Aaron Smehoff and also known as Abraham Smickoff, dropped out of school in Canada at age 12 and three years later, entered the United States alone, through Detroit. Born to Orthodox Jewish parents in in Kiev, Ukraine in 1907, he and his family had immigrated to the Great White North when he was seven.

2) Smiley was involved in gambling in various ways in several states. With Siegel, he operated the Transamerica Wire Service, which provided race information from the California tracks, and he helped Siegel get the Flamingo hotel-casino built in Las Vegas, Nevada.

Smiley organized gambling junkets at various locales, including the Garden of Allah in West Hollywood, California; The Knickerbocker in New York, New York; the Argyle Hotel in San Antonio, Texas; the Colony Club in Gardena, California; and the Rex gambling ship, off of the Southern California coast.

He was the ambassador of gambling relations, essentially a recruiter of high-rollers, for the Beverly Country Club in New Orleans, La.

As a player, he loved betting on and watching horse racing. “The race was the one clandestine addiction he couldn’t conceal,” wrote his daughter Luellen Smiley in her memoir Cradle of Crime.

3) Throughout his life, Smiley racked up numerous arrests, for bookmaking, running a wire service, transporting gambling cheating equipment, assault, suspicion of murder, robbery, extortion, operating without a liquor license, contempt of court and other crimes.

4) After Siegel’s murder in 1947, Smiley needed legitimate employment, as he faced possible deportation, having been indicted for falsely writing on an arrest form he was an American citizen. He asked Mob accountant Meyer Lansky if he could get back his $30,000 ($319,000 today) investment in the Flamingo, and Lansky consented. Smiley then invested the money in Texas oil exploration.

5) In 1949, at the Little Chapel in Las Vegas, he married Lucille Casey, a John Robert Powers agency model and a dancer at the Frank Costello-owned Copacabana nightclub in New York City. (The two divorced in 1962.)

6) After being convicted of falsely claiming citizenship, Smiley served nine months of a one-year sentence, from February to November 1951, at the McNeil Island Corrections Center in Washington state. He was paroled early for good behavior.

7) While imprisoned, he testified, somewhat belligerently and in handcuffs, before the Kefauver Committee.

8) Smiley contracted hepatitis B during adulthood. He’d told a confidant that he’d gotten it after being injected with blood from donors suspected of having the virus, at McNeil Island as part of medical research that used prisoners as subjects.** (We couldn’t verify that he’d been one of these test subjects but confirmed that such an experiment was done at that very penitentiary. The purpose was to determine if hepatitis B was or was not a blood-borne disease.)

9) Despite the federal government’s threats to deport Smiley to Canada or the U.S.S.R. upon his release from McNeil Island, Smiley was allowed to stay stateside and eventually become a U.S. citizen, which he did in 1966.

10) He died from hepatitis-induced cirrhosis of the liver. Near his life’s end, he chose to stop the antiviral treatment for hepatitis that he’d been on, knowing that as a result, his liver disease would worsen and cause his demise. He passed away at age 74 or 75 on March 6, 1982.

** In the experiment, a total of 60 healthy, supposedly volunteer, prisoners at McNeil Island and at the U.S. Penitentiary, Lewisburg were injected. As a result, 27 of them contracted the virus; two at McNeil died not long after.