The Truth Lies Within 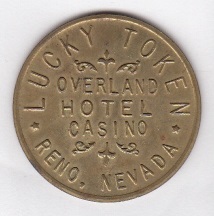 As of 1915, Nevada gambling law only allowed slot machines that discharged tokens, or bingles, exchangeable for on-site merchandise; those that paid out in money or bingles redeemable for currency were forbidden.

“The fact remains, however, that the illegal money machines are running unmolested all over the state and particularly in Reno, under the noses of the state police, the county officers and the city authorities,” noted a Reno Evening Gazette opinion piece (March 13, 1925).

The Nevada Committee on Good Laws, whose members included a reverend and a university professor, took it upon itself to investigate “the slot machine evil,” reported the Reno Evening Gazette (May 2, 1925). The group initiated its efforts in part because it opposed a bill the legislature had introduced that year to allow wide-open gambling. Although the assembly killed the proposal, it didn’t stop the crusaders. Police officers of several counties grew concerned about the spotlight on one-armed bandits and encouraged owners or licensees to turn their illegal ones toward the wall.

In late March, the committee complained to District Attorney L.D. Summerfield that local businesses still were operating the banned devices and pressured him to crack down on these violations. Summerfield immediately informed officers of the law about the illegal activity, reiterated the relevant statutes and directed them to enforce it.

Machines, Owners At Risk
A hearing took place for the justice of the peace to determine the fate of the proprietors and their gambling equipment. If convicted of the misdemeanor charge, the men would be sentenced to a $50 to $100 fine and/or 25 to 50 days in county jail. The machines could be destroyed.

“Reformers and uplifters” packed the courtroom, “the crowd bulging through the doors into the hallway of city hall,” reported the Reno Evening Gazette (May 2, 1925).

Summerfield called the state’s first witness, Good Laws committee member, Otis Linn. The reverend testified that on April 27, when he and Professor F.C. Feemster had played the slot machines at each of the five enterprises on trial, the payouts contained nickels. He showed the court some coins he claimed the instruments had spit out; a single nickel was in the bunch.

In his cross-examination of Linn, the defense attorney pointed out that no pay-back-money machines pay out fewer than two nickels.

“Linn became vexed during that and hurled a handful of coins on the floor as a protest,” noted the Reno Evening Gazette (May 2, 1925). “The Justice of the Peace requested he pick them up.”

Feemster then took the stand and corroborated all that Linn had said. Summerfield even testified, saying money came out when he’d played the machines after they’d been seized.

The only defense witness was up next — A.A. Baroni, the co-proprietor of the Owl Club, Washoe Lunch Counter and Overland Hotel. He testified that all the apparatuses had been loaded with bingles but sometimes nickels the customers inserted to play trickled down into the bingle compartment due to a mechanical defect.

Perry Mason Ending
The five contraptions in question then were opened in court for a look-see. A total of about 300 bingles and 17 nickels were in the bingle bin!

Justice of the Peace Seth W. Longabaugh mulled over the case for three weeks then ruled.

Seemingly highly influenced by the in-court demonstration of what currency actually sat inside the machines, he found the gambling operators had not intended to break the law and, therefore, were innocent.

As such, the gaming devices weren’t to be destroyed but, rather, returned to their owners, which they subsequently were.