The Big Squeeze at Reno Casino 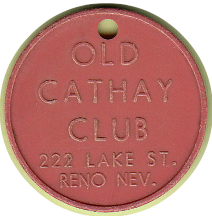 Token from the Old Cathay Club, a casino, restaurant and bar open in the mid-1950s in Reno, Nevada

Harry Chon, licensed operator of the gambling operations at the Old Cathay Club* in Reno, Nevada, found himself in an uncomfortable spot, under pressure from two parties, in 1956.

The story begins about a year earlier, when two other men, Horace Fong and his godfather, Moon Wah, applied unsuccessfully for a gambling license for the same property. Of the two, only Wah had casino experience, and he’d been convicted recently of tax evasion in California.

Soon after, Fong re-applied — this time with Chon named as the co-licensee — but to no avail because the Nevada Gaming Control Board (NGCB) deemed Fong unsuitable, likely due to his relationship with Wah.

Then Chon alone sought and was granted a gambling license to lease space from Fong and run a casino in it. Fong operated the other entities on the property, a restaurant and bar.

Rumblings Then Temblor
In spring 1957, the NGCB heard rumors that individuals other than Chon were running the gambling at the Old Cathay. It was verboten to change casino interests without approval first from gaming regulators, so agents investigated.

Chon confided in them he’d hired a man named Fred Down to manage the casino, but Down did what he (Down) wanted and had brought in George Chinn to be the pit boss, despite Chon having urged him not to. Chon also admitted he, himself:

The board ordered Chon to explain in person why he should be allowed to keep his license. In the interim, he voluntarily shuttered the Old Cathay casino, on March 15, to remove some of the people associated with it, he said.

Testimony Given
At the hearing, Chon relayed a different story, perhaps because Fong, Down and Chinn also were there. He denied telling anyone he lacked control over his club and the workers and that Down wouldn’t do what he said. Chon claimed it was his choice to not have the safe combination because he tended to spend money when he consumed too much alcohol.

However, he did concede to having expressed his concerns about Chinn to Down. (Chinn had had a run-in with the state some years prior when it was discovered he’d held a secret interest in the Yukon Club in Reno.) Chon said Down’s response had been that he and Chinn were friends but he’d take care of it later.

Chon explained he’d often traveled to and from San Francisco and spent three days a week there where he oversaw a grocery store.

Also, he vehemently denied that he’d allowed unlicensed parties to operate the casino, specifically Fong, Down and/or Chinn, or that he’d abandoned his gambling permit.

Fong and Chinn attested to not holding any interest in the Old Cathay Club.

The NGCB’s auditor testified that Chon had initially signed the casino checks but within a month of opening the doors, Down had assumed the task. He noted Chon had contributed $18,000 to the bankroll, but it hadn’t been recorded in the club’s accounting records.

It seems some bad characters had used Chon, without his knowledge, as a front man for the Old Cathay Club then took over.

The NGCB Rules
In May, pursuant to the testimony provided at the proceeding and their own findings, the board members determined that Chon:

• Hadn’t, willingly at least, allowed any transfer of interest in the casino, but they strongly doubted he truly controlled it
• Hadn’t allowed a concealed interest in the gambling house
• Hadn’t misrepresented information on his license application
• Had funded the bankroll via loans, but against the rules, the transactions hadn’t been recorded
• Had improperly maintained the bankroll and admitted he couldn’t control it
• Had conducted the business unacceptably

Consequently, the agents unanimously agreed Chon was unfit for a gambling license and, therefore, recommended it be revoked. In agreement, the tax commission pulled it.

Chinn Goes For It
With Chon out, Chinn, already on the NGCB’s radar as being shady, applied for a gambling permit in June to run the casino at the Old Cathay but under the name, California Club, noting he would invest $42,000 in it.

As expected, regulators denied the license because of “unsatisfactory past operation” (Nevada State Journal, June 27, 1957).

Chon, Take Two
Fast forward six years. Chon, who had his gambling license taken away, applied to have it reinstated. That time it was for Basin Street, a casino at 246 N. Lake Street, also in Reno. NGCB agents decided to give him another chance, as his prior infractions hadn’t been egregious and he’d closed his casino voluntarily before any state action. They voted 2 to 1 to give him one on a six-month conditional basis.

Chon ran that gambling house for two and a half years.

* The Old Cathay Club previously had been called Confucius and before that, the Lido Bar. It was located at 222 Lake Street in Reno (now a parking lot across from Greater Nevada Field).