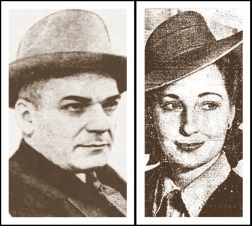 The brief union between Tony and Dorothy Stralla ended in a suspicious tragedy.

Antonio Cornero Stralla was a colorful, law defying, Southern California rumrunner turned gambler. He was involved, most often as the owner/operator, in a string of casino enterprises,  including the:

Dorothy Friend Thaxton was a nightclub singer known as Dorothy Carroll, and, prior to the marriage, Cornero Stralla’s publicist.

Following their nuptials, she lived in his Beverly Hills home, and he resided in Havana, where he ran the Montmartre nightclub-casino.

The Bloom is Off the Rose
About two months later, the couple separated following a heated argument at the Southern California house, to which the police were called and Friend Thaxton was taken to the local emergency room for care.

“She first said she had swallowed the contents of two bottles of iodine, and later said she had just stained her lips and hands with the brownish liquid,” reported the Los Angeles Times (July 10, 1941).

A week after that incident, Cornero Stralla filed for a marriage annulment, claiming Friend Thaxton hadn’t “fulfilled her marital obligations” and had pursued the union with him intending never to do so.

The Times noted, “‘Admiral’ Tony Cornero’s latest romance has faded — quick than a sucker’s bankroll aboard one of the floating gambling ships that formerly beckoned the unwary along the Southern California coast.”

“Cold, Harsh, Devoid of Affection”
Friend Thaxton responded with a cross-complaint, citing cruelty and desertion and asking for separate maintenance. This is an order requiring a spouse to make support, or maintenance, payments to the other, via a separation agreement. In her filing, Friend Thaxton requested $150 (about $2,500 today) per month, 15 percent of Cornero Stralla’s monthly income of about $1,000 ($17,000 today). She denied her husband’s accusations.

On the couple’s subsequent court date in late July, Friend Thaxton showed but Cornero Stralla didn’t. He was away on business, his attorney said. Friend Thaxton told the judge that since she and Cornero Stralla had separated, her husband hadn’t supported her, thereby forcing her to pawn her jewelry and borrow money from friends.

In late July, a judge ordered the gambler to pay the monthly $150 in alimony but only temporarily. Even though the marriage was so short-lived, by California law he had to do so because he’d been the one to initiate the union’s dissolution. Were she to have filed for the annulment instead, he wouldn’t have had to support her.

Whiplash of Extremes
A month later, the two dismissed their respective legal actions, supposedly having reunited.

Had Cornero Stralla coerced or manipulated Friend Thaxton into dropping her alimony request or had she done so willingly?

A week later, on September 4, the two were in a Las Vegas court, where Friend Thaxton was granted a marriage annulment.

Who Was Responsible?
Following the hearing, she was driving herself home to Hollywood, when she got into a serious car accident about 18 miles west of Baker, California. When she’d tried to pass another car along the shoulder, traveling at a high speed, she lost control. Her vehicle skidded about 140 feet, overturned three times and skidded another 150 feet. She was thrown about 70 feet from where the car came to a rest.

Cornero Stralla had been following her in his car, hoping to overtake her and get her to stop driving, as she’d been drinking and “in no condition to drive,” he told police (Los Angeles Times, Sept. 6, 1941). He claimed she’d exceeded 100 mph at times.

What really happened on that drive?

At 6:15 the next morning, Friend Thaxton died in a doctor’s office from her injuries, which included a skull fracture.