Replicated Casinos: Who, Why, When and Where

Home / Geographical Areas / Beverly Hills-California / Replicated Casinos: Who, Why, When and Where 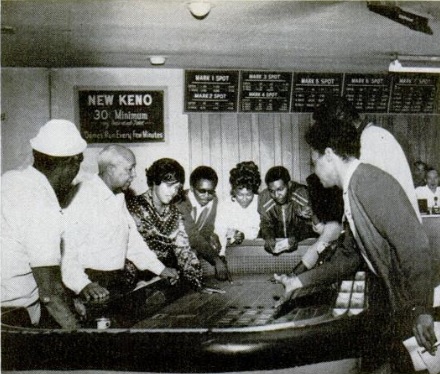 Over the years, entities around the world fashioned casinos for various educational and training purposes. Here are four that were based in the U.S.:

In 1957, the Royal Nevada in Las Vegas set up and housed a cash-less casino in its Beverly Hills, California reservations office. The purpose was to teach potential hotel-casino guests how to play craps, cards and roulette, which were offered at its Southern Nevada property, and ultimately garner business for its real gambling house. Since opening two years earlier, the Royal Nevada resort in Vegas had struggled financially amid great competition.

The faux casino operation was short-lived, however, because Police Chief Clinton H. Anderson soon learned of it.

“He descended on the place in high dudgeon and issued this ultimatum: ‘Get that stuff out of here or else,’” reported the Madera Tribune (April 24, 1957).

Starting in 1962, when gambling was banned in Wisconsin, the State Historical Society in Madison featured the exhibit, “You Can’t Win,” in its Room 118.

It was a makeshift casino, with a dozen-plus slot machines, a roulette wheel, chuck-a-luck cage, faro layout, parlay tickets, punchboards, crooked dice and marked cards. The slots, for instance, had come from raids on illegal gambling, in 1948, when Wisconsin ranked second among the states for having the most machines operating.

Accompanying information included the games’ odds, reasons why “you can’t win” and historical facts. One tidbit was that crooked dice had been found as early as 400 B.C. Another was that gambling in the U.S. at the time was a $500 billion a year industry, 9 percent of which, or $45 billion, went to casino owners.

With U.S. government dollars, Reverend Leo A. Johnson, the deputy director of the Concentrated Employment Program (CEP) in Las Vegas, created a mock casino on the West Side to teach young, unemployed African American men how to deal craps, blackjack and keno, jobs that had been denied black people in the city until 1965. The federally mandated CEP aimed to focus various manpower programs and related services in areas with the highest unemployment rates. Howard Hughes’ Landmark Hotel and Casino donated the gaming tables for this school that launched in 1968.

Students worked for nine weeks in the faux gambling room, posing as both dealers and customers, to develop the necessary job skills and poise. They were paid $47 a week (about $322 today), the amount they would’ve received in unemployment benefits.

Despite a rocky start, the school became successful and, over its years in existence, graduated numerous people. It operated for at least three years, perhaps more.

In 1974, in one of its Virginia buildings, the Federal Bureau of Investigation (FBI) established a casino, complete with slot machines, a roulette wheel, blackjack table, craps table — “our version of Reno,” described Charlie J. Parsons, an agent who specialized in gambling and organized crime investigations (Reno Evening Gazette, Nov. 28, 1974).

All of the equipment, some of it rigged, had been confiscated from actual gaming operations and turned over to the federal law enforcement agency by the courts.

The faux casino’s purpose was to teach FBI agents all about gambling.