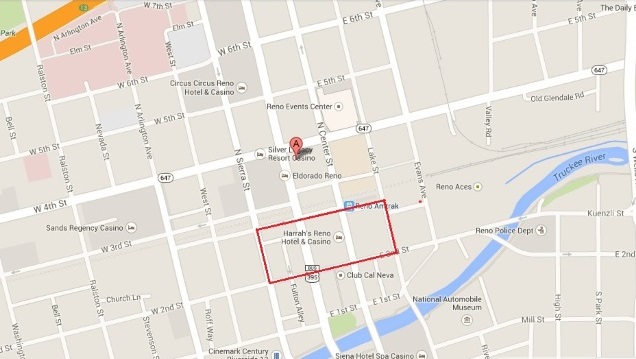 For some businesses, the Red Line was beneficial; for others, detrimental.

The Red Line designated a rectangular region of downtown Reno, Nevada in which casinos with unlimited gambling could exist. Clubs offering gambling outside the designated area were limited to 20 slot machines and three blackjack tables.

The city council officially created this district in 1947 via ordinance 791 as a way to control gambling. Once the industry had been legalized in 1931, new clubs had sprung up and existing illegal casinos had moved to operate in the light — all over downtown Reno. So many places had opened so quickly that business and property owners had feared land values would soar, making it no longer economically viable to run small non-gaming operations in the city core.

The name came from the red line that was used to indicate the boundaries on a map. Those were roughly Sierra Street on the west, Commercial Row on the north, Lake Street on the east and Second Street on the South. The governing body adjusted the zone slightly over the years due to pressure by various groups.

Tested in the Courts
The Red Line became one of Reno’s highly controversial and contested issues.

Over the decades, several individuals and groups protested the Red Line, some even demanding the city council repeal the ordinance. For example, Ernest J. Primm, owner of Club Primadonna, who wanted to expand his place beyond the Red Line, took the matter to the Nevada Supreme Court in the late 1940s. He argued the city council’s denial of his request was discriminatory and arbitrary. The higher court, however, also ruled against Primm.

In 1961, the city council expanded the zone but only for some. To encourage construction of fancy hotels, it exempted from the Red Line law those in downtown Reno with more than 100 rooms.

The issue again heated up in that decade. Critics argued the Red Line continued to hurt Reno in that a few major operations monopolized downtown, squeezing out potential smaller gambling businesses.

In mid-1969, the city council again denied a request to eradicate the Red Line. Soon after, owners of the Colony Casino, located just outside the Red Line, sued the city of Reno and its councilmen and manager, claiming the gambling boundary was unconstitutional and the city lacked the authority to pass such an ordinance.

But, like with Primm’s case, the judge ruled the ordinance was constitutional and a proper exercise of power.

Council Takes Action
In spring 1970, the city council passed an ordinance that eliminated the Red Line and, instead, replaced it with a 100-room mandate.

Under the new regulation, all businesses that wanted to offer unrestricted gambling could, anywhere in Reno, not just downtown, but had to have 100 or more lodging rooms on offer. Previously, that hadn’t been the case for properties within the designated zone.

Seventeen downtown casinos were grandfathered in under the new law; if they were to expand their casinos, they wouldn’t have to construct 100 rooms if the added space adjoined their existing gambling facility.

The new ordinance, which seemed more restrictive than the original, came under attack. But it stood.