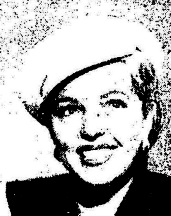 Hollywood actress Mildred Jenkins testified in court about her wedding night in Nevada. After marrying A.Q. Bonner, Jr., a Northern California rancher, the two had breakfast and went to a casino.

“A.Q. lost all his money then insisted I give him mine because, he said, it belonged to both of us now,” she said. “When I repeatedly refused, he said I took the marriage too seriously and that he thought it was just a good gag” (Los Angeles Times, July 26, 1947).

The judge granted Jenkins an annulment.