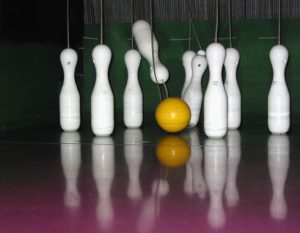 In this decade, moral fervor over gambling and organized crime led many United States cities to outlaw nine-pin bowling, which had been popular since colonial times. By the mid-40s, nine pin had vanished from the country except for in Texas, where instead of illegalizing it, they taxed it at $150 per year (today, about $2,500 annually).

To get around this nearly nationwide ban on nine pin, ten-pin bowling was invented.