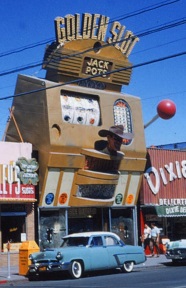 After Robert Van Santen and Cecil Lynch’s business partnership in the Las Vegas, Nevada Fortune Club soured (Lynch broke off to open his own gambling club at the Golden Slot site), the two fought over use of that name for their respective casinos.

When Clark County commissioners threatened to resolve the issue, though, the men came to an agreement, and Van Santen dropped the lawsuit.