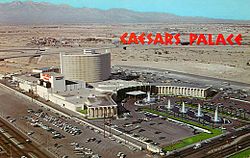 The hotel-casino resort in 1970

Caesars Palace in Las Vegas extended $160 million in credit to players in 1977. This was more than the then-considered staggering $106 million cost of the original MGM Grand (early ’70s), also in Sin City, and equals roughly $641 million today.

Offering credit to players who were deemed able to repay it was a common practice among Nevada casinos, and these IOUs, or markers, collectively could add up to great sums. In the 1970s the major casinos on the Las Vegas Strip had as much as $30 million in outstanding credit on their books ($135.5 million today) at any given time; for smaller off-Strip casinos, the figure was closer to $1 million ($4.5 million today).