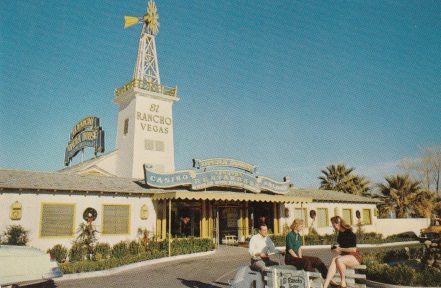 “With illegal gambling considerably reduced in Miami, Chicago, Cleveland and the other big cities, the big spenders out to make a fast buck on the wheel or crap table are flocking to Las Vegas,” the newspaper added. “Weekend reservations at the flossier* hotels like the Last Frontier, Flamingo, Desert Inn, Thunderbird and El Rancho are getting scarce for next winter. Motels and private rooms are jammed all the time.”

In fact, in 1951, Nevada yielded the highest ever gambling tax revenue to that point, of $1.5 million ($13.7 million today). That meant gamblers cumulatively bet about $1 billion ($9.2 billion) in the state over the 12-month period.

Spin on the Story?
Just as the industry was flourishing, a potentially detrimental news story came out. It noted some of 30,000 crooked gambling devices – loaded dice, marked cards and wired roulette wheels – discovered in a Phoenix, Arizona warehouse were destined for Nevada. Specifically, packets of illegal dice bore the monogram of various Las Vegas and Reno clubs, according to Sheriff Cal E. Boies, who’d stumbled upon the cache.

Strangely, though, soon after his initial report, Boies backtracked and said the equipment wasn’t slated for Nevada, only New Mexico and other parts of Arizona.

“However, it was learned that a reliable Phoenix source had actually seen the crooked dice monogrammed with the names of certain Las Vegas clubs,” reported the Reno Evening Gazette (Dec. 30, 1951).

The members of the Nevada Tax Commission, which regulated gambling then, scrambled to quell the evolving public relations nightmare for fear rumors of crooked casinos in the state would keep away people wanting to play games of chance. The regulatory agency immediately sent one of its investigators, Ray Warren, to Phoenix to determine if in fact Silver State gaming clubs were involved.

Warren quickly reported he hadn’t found any evidence to indicate any of the gambling devices were to be going to Nevada. He added the crooked dice in question were not loaded and merely were displayed souvenirs of the manufacturing shop owner, which he’d purchased 10 years prior when he’d lived in Reno and Las Vegas.

The same day, tax commission secretary, Robbins Cahill, emphatically denied on the record that any crooked gambling equipment had been sent to or intended for any Nevada casinos.

“He added that no major casino in Nevada has ever been caught using loaded dice and that, on the contrary, the clubs’ biggest problem in that respect was to prevent players from trying to exchange crooked dice for the carefully inspected and closely watched dice used by the casinos,” noted the Nevada State Journal, Jan. 1, 1952).