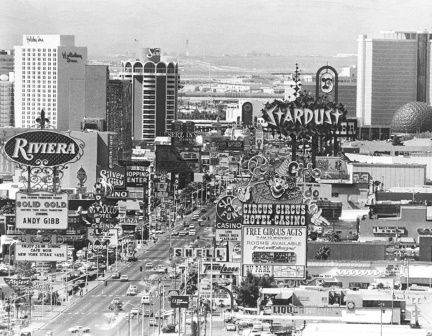 Actress Jane Fonda and renowned activists led about 900 people down the Las Vegas Strip on March 6, 1971, a Saturday, in protest of welfare cutbacks.

Starting at a parking lot behind Circus Circus around 1 p.m., the group, displaying signs with various messages, such as “Nevada Starves Children” and “Don’t Gamble with Human Lives,” slowly meandered the four miles to Caesars Palace.

Once there, they went inside and while waving banners and signs, chanted and sang “We Will Overcome.” They marched through the casino, held a brief rally near the back of the building, during which the resort’s management closed the gaming tables, about 15 to 30 minutes.

The group then returned to the front steps for a sit-in that blocked the front entrance. Guests were re-routed to a separate doorway.

(Fonda left sometime during the march to fly to San Francisco.)

The Precipitating Factor
Earlier that year, Nevada welfare director George Miller removed about 1,128, or 20 percent, of people from the state’s list of welfare recipients because they allegedly had lied about their income when they’d applied for public assistance. Miller’s action affected about 3,000 individuals.

The National Welfare Rights Organization claimed the state had stopped the aid checks without affording the recipients the due process the law guarantees. The group demanded the firing of Miller and reversal of what he’d done. However, Nevada Gov. Mike O’Callahan refused to order either.

Subsequently, NWRO’s executive director George Wiley vowed to protest by disrupting the gambling industry in the city that it dominated, Las Vegas, until Nevada reinstated all dropped welfare recipients. Another aim was to warn other states not to do what The Silver State had done.

A Second Go
On the Saturday following the initial protest, the NWRO and about 250 people again marched, for the same purpose, along the Strip, this time from the Las Vegas Convention Center to the Sands. Moving slowly, the group blocked traffic on South Las Vegas Boulevard and refused to disperse on orders from law enforcement officers.

Consequently, about 85 protesters were arrested. While that was happening, members of the throng shouted, “Arrest George Miller” and other commands and declarations.

When the demonstrators arrived at the hotel-casino, they tried to enter it to disrupt the gambling taking place, but security guards blocked the doors with furniture and their bodies.

“Aren’t we allowed in this hotel like anyone else?” Wiley asked.

Others yelled, “Does the hotel take no responsibility for those children who are starving, for mothers who have to turn to prostitution or to crime? Someone may be burning this hotel down.”

“Then shouts of ‘let’s burn it’ arose from the crowd, which was crushing up against the doors,” noted the Nevada State Journal (March 14, 1971).

Check is in the Mail
Later that month, Federal Judge Roger Foley ruled the State of Nevada, in cutting people off from receiving welfare, had violated their rights. As such, he ordered their names be replaced in the register immediately.

In fact, they were. Soon after, the affected people all got a check in the mail.