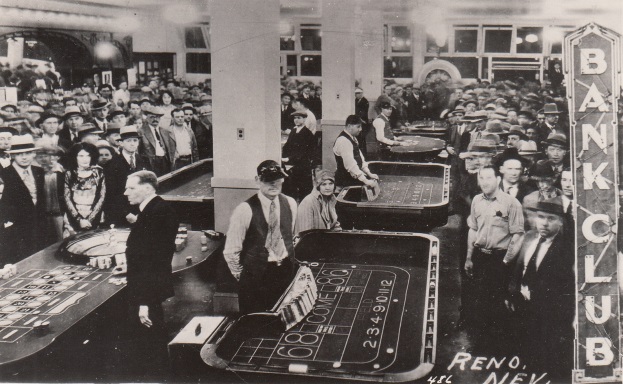 Mobster Meyer Lansky had a hidden interest in this casino, the Bank Club, in Reno, Nevada

“If the Streeter suggestion should catch fire and the state took over gambling, it would be the damnedest experiment tried in the United States, and Nevada would have more hoodlums per square block than it has jackrabbits per square mile,” read a non-bylined Nevada State Journal op-ed piece, referring to the idea of Jack Streeter, a local district attorney (Dec. 19, 1954).

The Back Story
Mobsters were running some Nevada casinos, and others planned to infiltrate the industry, too. That was the crux of the warning Virgil Peterson gave to The Silver State’s gambling regulators in late 1954. Peterson was the Chicago Crime Commission director and a mob expert. Gangsters’ battle for control of gambling in the state eventually would result in violent warfare, he also cautioned.

In response, the Nevada Tax Commission, which oversaw gaming then, didn’t act other than to say they’d known for a while that underworld factions were trying to usurp gambling in the state.

A Northern Nevada politician, however, offered a possible solution that he argued would get out and keep out the mob: have the state run gambling, then an $89 million-a-year business.

Jack Streeter, Washoe County district attorney, proposed that Nevada lease the casinos and buy the equipment from the owners. The state would guarantee jobs to the people already employed in the industry as long as they had respectable reputations. A commission elected by Nevadans would control the industry. All profits would go to the state.

Streeter drafted such a bill, which, if enacted, was to take effect on January 1, 1956.

Motivating Factors
The increasing negative publicity surrounding gambling and gamblers and the fact that “we are regarded with suspicion by our sister states,” distressed Streeter, he said, and prompted his concept (Nevada State Journal, Dec. 14, 1954).

Streeter wasn’t alone in worrying about the gaming industry’s fate. Casino and other business owners feared the adverse nationwide press would:

“Witness the number of bills that have been introduced in Congress in recent sessions, all aimed at killing, crippling or taxing to death our legal gambling industry … merely [a] forerunner of a determined effort to wipe out the gambling industry here,” Streeter added.

A Silver Bullet
The D.A. argued that state-controlled gambling would:

With all of this money in the state’s coffers, taxes — perhaps sales, income or inheritance — could be eliminated, Streeter said.

“If the citizens of Nevada are going to put up with gambling,” he said, “they might as well enjoy relief from more taxes.”

Unpopular Idea
Streeter’s proposal, however, faced a major hurdle. Governor Charles Russell vowed to veto it should the legislature pass it.

“I’m opposed to the state entering the business as such, although I’ve repeatedly stated that when a privileged, licensed business exists, it’s the right of the state to license and police that business,” he said.

Myrton “Mert” Wertheimer described Streeter’s plan as “fantastic.” Wertheimer, the casino operator at the Riverside Hotel in Reno, had been a partner of Meyer Lansky in Miami and a former member of the Purple Gang, Detroit’s most notorious organized crime group in the 1920s and ’30s, which controlled that city’s gambling, liquor and drugs.

“It’s not like a grocery store. It takes know-how. Gambling is a highly specialized field and nobody in the state except gamblers are trained for the job,” Wertheimer added. “The state might just as well take over the construction business.”

As for the Reno Chamber of Commerce, it, too, was “against state or federal operation of any business in Nevada,” said Joe F. McDonald, the group’s vice president. “We believe in the system of free enterprise that established our state and city. The plan as advocated by our district attorney is fantastically unsound.”

The Nevada State Journal newspaper noted the scheme wasn’t feasible without the passage of additional laws and if the state kept open all the existing casinos, it would be competing against itself.

The Upshot (or Shot Down, in this Case)
It appears as though Streeter’s bill wasn’t even introduced to legislators. If by some chance it was, it had little to no traction.

The 1955 Nevada Legislature took a different approach to addressing, or perhaps simply appearing to be addressing, the gambling problems of mobster infiltration and negative publicity.