Pay Up Or Blow Up — Reno/Sparks

Home / Geographical Areas / California / Pay Up Or Blow Up — Reno/Sparks 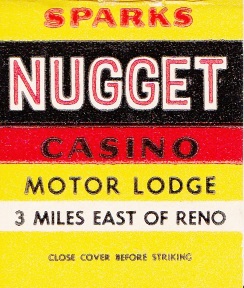 In the summer of 1970, a package and suitcase found in a Sparks Nugget Motor Lodge room in Northern Nevada with a note affixed saying to please deliver the items to Nugget owner John Ascuaga’s office. A $20 bill was attached as a tip.

A few days later, Nugget manager Gil Padroli opened the package. It contained a bomb — an explosives-filled cardboard tube attached to a timing mechanism and battery! (Police discovered, though, it wasn’t wired to detonate.)

A handwritten message with the device demanded a total of $1 million from the Sparks Nugget, Harolds Club and Harrah’s Club. The casinos were to exactly follow two outlined steps to deliver the cash. First, they were to mail $100,000 to two different California post office boxes. The money had to arrive within four days (Wednesday, June 24). If it wasn’t, wired bombs like the one in the package would be planted in their casinos.

Padroli, however, hadn’t even opened the package left for Ascuaga until the day after the deadline. But no bombs exploded or were found. Police, however, sent a portion of the $200,000 to the mailboxes and posted surveillance teams at each. Nothing happened.

A similar extortion case would take place in Southern Nevada two years later, in which a different perpetrator demanded 21 Las Vegas hotel-casinos pay a total of $2 million or get bombed one by one.

Instructions, Part Two
The second step was for the casinos to place another $200,000 in the trunk of a car parked on a rural street south of downtown Reno. If this wasn’t done by 10 p.m. Tuesday, June 30, then 84 bombs in various places would detonate. In the trunk would be the location of 40 explosive devices along with final directions for where to leave the remaining $600,000. At that site, a note would indicate where the remaining 44 bombs were placed.

That day, about 60 law enforcement officers, many disguised as campers and hunters, staked out the area around the drop site. But by 11:20 p.m., when the police chief aborted the operation, no one had shown to retrieve the money.

Pursuit Of Suspects
Having worked the case for days, the police identified some suspects:

• One was arrested on an unrelated charge in California soon after the package had been left at the Nugget.

• Police booked the primary suspect, a second California man, Eugene Raymond Dill, a 32-year-old contractor, and charged him with extortion.

• Three months later, Frank Richard Gunn, a friend of Dill, also was apprehended in Seattle and charged with being an accessory after the fact.

The district attorney’s office, however, only pursued charges against Dill, who pleaded innocent, and the case went to trial in March 1971. A latent fingerprint examiner testified that Dill’s fingerprints were found on the sample bomb. When the prosecution called Gunn as a witness, he pleaded the Fifth Amendment. The judge, however, threatened him with contempt of court charges, forcing him to testify, during which he denied any knowledge of the crime.

After four hours of deliberation, the jury decided Dill was innocent.

A month later, Frank Gunn billed the Washoe County Board of Commissioners for $45,000 in damages as compensation for a false arrest in the bomb extortion case. Commissioners denied the request.