• Nevada licensees might form alliances with U.S. mobsters in Havana, who primarily ran gambling there

• U.S. lawmakers might grow intolerable of the political ties between Nevada licensees/their agents and the Cuban government

• U.S. lawmakers might, therefore, pass a law that eradicates legal gambling in Nevada

“I don’t like to see them use the stamp of respectability given them by Nevada as a magic wand to go into similar business ventures in other part of the world,” Johnson said (Reno Evening Gazette, Jan. 26, 1957). “From now on I’m going to dedicate my efforts to protecting Nevada’s gambling monopoly.”

Johnson, therefore, was tasked with studying the effects on the state of its licensees being involved in Cuban gambling.

Potential Stain on Nevada
Before he could report his findings as planned, prior to the next (1959) legislative session, events took place that forced Nevada’s gaming regulators to take a stand immediately.

In December 1957, Albert Anastasia was murdered. He’d been a boss of the Giambino crime family and head of Murder, Inc., the Mafia’s enforcement branch that was founded by notorious, New York mobster Meyer Lansky, who also was an associate of Charles “Lucky” Luciano.

New York police were investigating the angle that mobsters involved in Cuba’s gambling industry, Lansky in particular, had Anastasia whacked because he’d tried to horn in on that territory.

Of the surreptitiously taken photos in the piece, one depicted Meyer Lansky and a woman leaving the Riviera casino. The description noted that he carried a “satchel reported to have contained $200,000 from cashier’s office” and went on to state, “Lansky was returning to U.S., where he was picked up for questioning in the Anastasia murder case.”

Meyer Lansky, known as the mob’s accountant, had gambling interests from coast to coast in the United States and had been a key player in the Mafia’s development of Las Vegas. Another image showed Meyer’s brother, Jake Lansky, in Cuba’s Nacional casino.

Spotlight on Silver State
The LIFE article stated Nevada’s casino industry was spotless: “Ever since the Nevada boom hit full stride in the ’40s, the gambling mob has been ‘legit,’ shunning the back streets and peepholes, running scrupulously honest tables, keeping books and paying income taxes.” (This was partially valid.)

The piece, though, also revealed that some Silver State licensees were entangled with major mobsters in Cuba, where the industry wasn’t so clean. (This was true.) 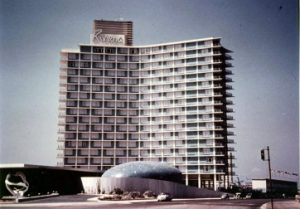 The Lanskys managed Cuba’s Nacional casino while owner Wilbur Clark, co-owner of the Desert Inn in Las Vegas, was the front man and three other Desert Inn shareholders were investors. Meyer also owned a piece of the action at the Havana Riviera casino with three Nevadans tied to the Sands and the Fremont hotel-casinos in Sin City.

The other Nevada gaming licensee involved in Cuban gambling was Clifford Jones, the co-owner of the Thunderbird Hotel in Las Vegas, who owned a percent interest in the Havana Hilton casino.

“Nevada, which has already been and is under fire, cannot stand idly by when licensees participate in activities which in any way bring notoriety or discredit to the state,” the Nevada Gaming Control Board (NGCB) wrote in a report (Reno Evening Gazette, April 25, 1958).

The rumor in Cuba then was that the all-powerful in Las Vegas orchestrated the LIFE exposé and were supporting Fidel Castro to collapse Havana gambling. Many Nevada gamblers didn’t like the industry’s booming success in the island nation where the swanky hotels and casinos were larger than any in Las Vegas.

In or Out?
The LIFE article spurred the Silver State’s gambling regulators to act. In April, they demanded that the eight licensees with financial interests in Cuban casinos choose Nevada or Cuba, as they no longer could operate in both places.

All of the gamblers selected Nevada and claimed they’d divest their Cuban holdings but noted it might take some time.

A new Nevada regulation followed that bars all state gambling licensees from engaging in casino operations in any other state or nation.

Photo from the University of Miami Libraries’ Digital Collections