This is the third of a series of posts related to and leading up to the release on Dec. 6 of A Bold Gamble at Lake Tahoe: Crime and Corruption in a Casino’s Evolution by this author. The nonfiction book chronicles the often-unbelievable, conflict-filled early history of the Incline Village, Nevada-based hotel-casino that today is the Hyatt Regency Lake Tahoe Resort, Spa and Casino. 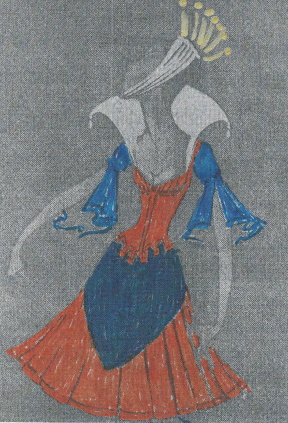 The doorman was a knight in armor; the maître d’, a prince; the dining room hostess, a princess … Each and every one of the 900 or so employees at Kings Castle, even the phone operators, wore a costume while at work.

Kings Castle, the brainchild of Nathan “Nate” S. Jacobson, debuted in Incline Village on Lake Tahoe in Nevada in 1970. The work uniforms were just another extension of the English royalty motif that permeated the resort.

Fabrics primarily were crêpes and an imported French silk cotton used on both its shiny and matte sides. Embellishments included pearls, brass, horsehair, gold braided headdresses for the men, tiaras for the women, faux chain mail and leather. 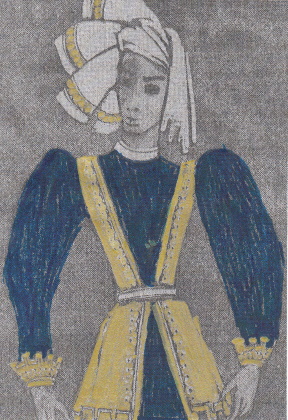 Tommy Papagna recalled wearing a court jester costume, a long-sleeved lavender top with a large collar and cuffs shaped like crowns, both yellow. He was a roulette, 21 and baccarat dealer in Kings Castle’s casino during 1973 and 1974.

“I liked wearing the costumes because they were comfortable,” he said (March 2018).

Not Just Any Designer
Jacobson chose and commissioned Fresnay to create the costume series. Fresnay, age 39 at the time and a graduate of the Beaux Arts Academy in Paris, France, had become renowned after designing Marlene Dietrich’s gowns for her appearance at the Olympia Theatre in 1962.