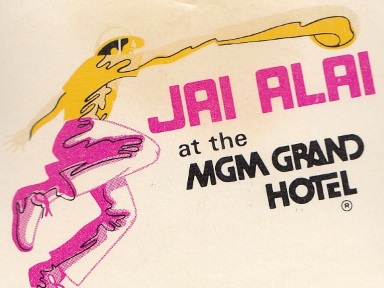 A revolt of the performers — athletes in this case — threatened to close a popular attraction at the MGM Grand Hotel in Las Vegas — jai alai.

Unique to the Strip at the time, it was designed as part of the Nevada resort’s entertainment package to lure visitors into the casino.

Jai alai (jai meaning festival and alai, merry in Spanish) is a court game in which players use a long hand-shaped basket strapped to their wrist to propel a ball against a wall. In Spain it’s a national sport, particularly in the northern Basque provinces.

Players Take a Stand
Unexpectedly, one day in October 1975, during the second season of jai alai at the hotel-casino, the team didn’t show, and the MGM Grand received word they were on strike. The hotel management sent a telegram to each member, informing them their no-show violated their contract with the MGM Grand and Nevada Gaming Commission regulations. They warned the players their jobs and their work visas were in jeopardy (most of them were from Spain and Mexico).

Subsequently, the U.S. Immigration and Naturalization Service (INS) gave the 32 players a November 7 deadline to return to work or face deportation proceedings because the strike voided the hotel’s petition to accept the players into the U.S.

Reasons for Discontent
The team had approached the Teamsters Local 995 earlier that year and expressed discontent, wanting to have a say in their working conditions and contract.

Union secretary/treasurer, Richard Thomas, described it as “a one-way, unilateral agreement — totally illegal” that favored MGM management. He added the players were “grossly underpaid,” earning $550 a month ($2,400 today) with housing provided and one free meal a day and the opportunity to earn a $100 a month bonus.

At that time, the union filed a petition for a National Labor Relations Board (NLRB) election to represent the players at the MGM, and the hotel protested the board had no jurisdiction over jai alai players. Due to that issue, the NLRB referred the case to its council in Washington, D.C., which still hadn’t weighed in after six months.

Weeks-Long Strike
Thomas said the strike would continue until the MGM acknowledged the union as the players’ official bargaining agent.

“These guys are caught between two federal agencies,” he said, “the immigration bureau and the National Labor Relations Board” (Las Vegas Sun, November 4, 1975).

Union officials and MGM management worked to hash out an agreement to end the strike but failed.

The INS’ deadline passed. The agency cancelled the work visas of the players and notified them of their upcoming deportation.

Soon after, the players left the United States, having agreed to go home or having been expelled.

“Their contracts are up the first part of December. They elected to go home,” Thomas said, stressing their action was not a defeat. “They were not hurt financially because they are going to be compensated for the time lost.”

The NLRB finally acted, ordering a representation election by the players within 30 days, but it was too late.

The MGM restarted its jai alai program in late December 1975 with 27 new players, most of whom hailed from outside the country.