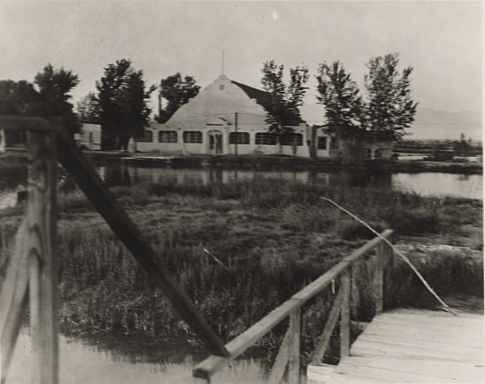 Soon after Governor Frederic “Fred” B. Balzar approved wide-open gambling for Nevada, three men applied for an initial gambling license  from the City of Las Vegas to operate a craps game at Lorenzi’s Lake Park in the Pavilion building.

The city commissioners denied Roy Grimes, R.H. Davenport and D.J. MacCauley a gambling permit, which they believed was unjust and discriminatory. The new state gambling law began on March 19, and they’d filed their application on April 17, in proper form and meeting all the necessary requirements.

Agency’s Approach Questioned
In fact, the commissioners’ refusal to grant the three men a license was in accord with the agency’s recently adopted resolution, on March 30, that it only would afford gambling licenses in the future to entities that already had one from the previous quarter. The moratorium was to go into effect on April 5 and remain in place until the agency could develop a policy for issuing new licenses and outline a city area in which gambling houses could operate.

However, prior to moratorium decision, the commissioners had granted gambling licenses to six clubs — Boulder, Las Vegas, Exchange, Northern, Red Rooster and Meadows.

“The city commissioners arbitrarily fixed the number to be granted at six, and rejected all other applications other than the six favored ones” reported the Nevada State Journal (May 28, 1931).

Further, after the decision, the commissioners make an exception to the moratorium, which was they could grant  gambling licenses to people of the “Ethiopian race” for games at establishments “that catered to persons of the same race.”

Off to the Courts
In early May, Grimes, Davenport and McCauley filed for a writ of mandamus against the Las Vegas mayor and city commissioners, the first court action to be filed in Nevada regarding the 1931 state gambling law. They wanted the court to compel the agency to give them a gambling license. (Another mandamus action in the wake of the new gambling law was taken later in the month, in Northern Nevada.) The trio’s attorney, Charles Lee Horsey, argued that “the law prohibits discriminations and that all who conform to the same standards must be given the same privileges.”

On May 27, the case was presented to the Nevada Supreme Court, whose jurists had to determine whether or not city or county authorities have the right to limit the number of gambling licenses to be issued in a community.

Gambling Stigma Revealed
The ruling, which came two months later, in July, was the opinion of two of the three judges, Edward A. Ducker and Benjamin W. Coleman. It determined that “the city of Las Vegas exercised sound discretion in denying the application” because it was for a type of business that was “of a character regarded as tending to be injurious” (Nevada State Journal, July 9, 1931).  And when it came to this kind of enterprise, governing bodies could control which ones did and didn’t receive gambling licenses.

Contrarily, Judge John A. Sanders, the sole dissenter, opined that the commissioners indeed had acted arbitrarily and discriminatorily and that the writ should be granted.