Lawsuit: I’m Entitled to a Cut 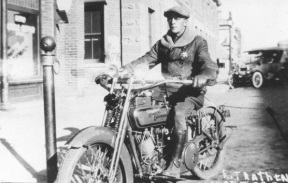 In April 1931, the month after the new, liberal gambling law went into effect (March 19), Washoe County Sheriff E. Russell Trathen, per his job description, collected $20,000 (about $330,000 today) in gambling license fees for the month of April from operators in Northern Nevada.

Seeking Piece of the Pie
First, Trathen went to the Washoe County Commission (WCC) and demanded 6 percent of the total in commission, which amounted to about $720 ($11,800 today). He argued he was entitled to it based on the state’s license tax act of 1915, which afforded sheriffs a 6 percent cut of the proceeds of all business licenses (and 20% of grazing licenses) sold.

The commissioners sought a legal opinion from District Attorney Melvin Jepson, who advised them that according to the law, Trathen wasn’t owed or due any compensation for the collection of license fees. The WCC told the sheriff no.

Next Course of Action
Trathen then retained Attorney Lester D. Summerfield. In early May, the two filed for a writ of mandamus, which is an order from a superior court to a lower court, government entity, corporation or public entity to take or not take an action, as required by law. Summerfield/Trathen asked the Nevada Supreme Court to order the county treasurer to  accept the license fees Trathen had collected minus 6 percent becuase the treasurer had refused to do so the prior month, April. (Another mandamus action related to the new gambling law was taken earlier in the month in Las Vegas.)

“The case attracted wide interest through the state, as sheriffs of other counties might be able to collect a commission on gambling licenses” the Reno Evening Gazette noted (July 8, 1931).

Not Like the Others
On July 8, 1931, the higher court dismissed the writ of mandamus and issued its ruling, which was unanimous: Nevada sheriffs aren’t authorized to retain any part of the gambling license fees they collect. They said the 1931 gambling act, unlike the 1915 law, lacked a provision for such a commission.

What the new legislation did spell out was that sheriffs were responsible for unpaid fees; they were “held liable on [their] official bond for all moneys due for such licenses remaining uncollected by reason of [their] negligence,” reported the Nevada State Journal (July 9, 1931).