Investigation of the Death of Mobster-Gambler Mert Wertheimer 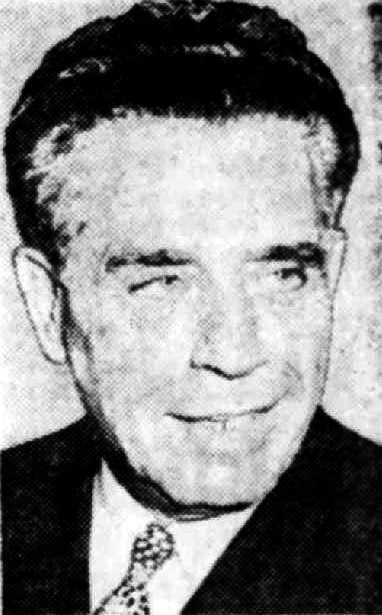 Myrton “Mert” C. Wertheimer was murdered, William “Bill/Curly” J. Graham ordered the hit and Frank “Frankie” Frost carried it out. This was hearsay from Los Angeles Mobster and made man, Aladena James “Jimmy/The Weasel” Fratianno, as documented in Ovid Demaris‘ biography of Fratianno, The Last Mafioso.

Page 173 (hardback version) contains a conversation relayed to Demaris by Fratianno, between him and two Chicago Outfit members, Sam “Momo” Giancana and Johnny Rosselli. The three were reminiscing after Rosselli was released from prison, and the topic turned to Graham, then deceased. Fratianno says, “‘In his day, [Graham] was a worker. He was telling me one time that he had Frankie Frost clip Mert Wertheimer in Reno. You know, the guy that had the Riverside Hotel.'”

Wertheimer in fact ran the Riverside Hotel casino, called the Riverside Buffet, from 1949 to 1955, first as a lessee then as the owner, and for the three previous years, was involved in the Nevada Club.

Fellow Mobster-gambler, Graham, controlled Reno gambling and organized crime and owned several Northern Nevada casinos, including the Bank Club and the Willows in Reno and the Cal-Neva Lodge in Crystal Bay, between the 1920s and 1940s.

Frost was a hitman, jewelry thief and friend of Graham, who lived in The Biggest Little City for some time.

Were these allegations involving Wertheimer, Graham and Frost true? It Really Happened! investigated. 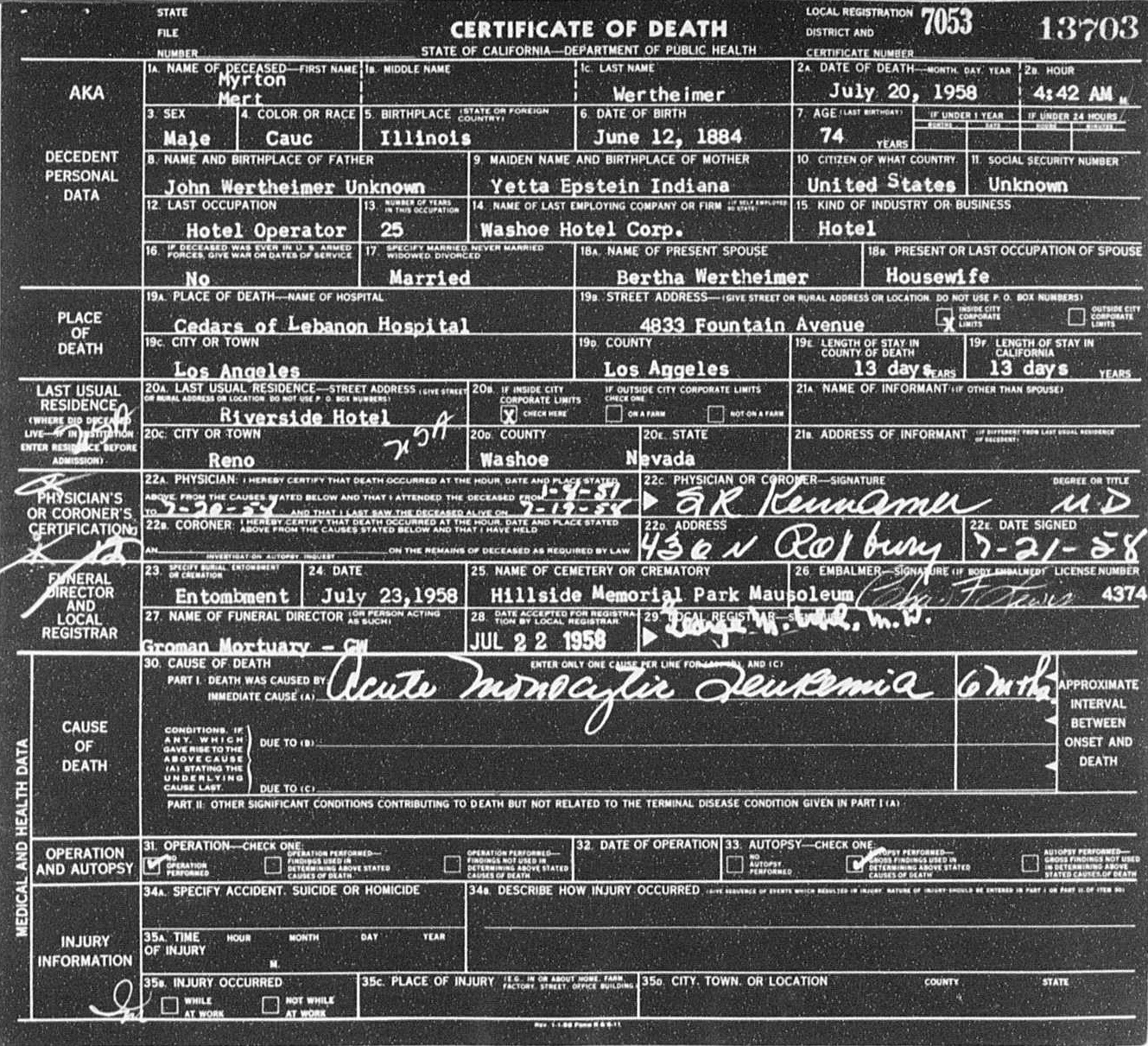 Circumstances of Death: True or False?
Mert Wertheimer, the eldest of four brothers, died at age 74 in Los Angeles, California on July 20, 1958. His demise was suspicious in that it happened only two months after his brother Lou’s passing.

At face value, Mert Wertheimer’s death certificate does not indicate homicide, but perhaps it was falsified to hide the truth. The document primarily was typewritten except for the cause of death, time of diagnosis and a few other details that Wertheimer’s personal, Beverly Hills, California-based physician (whose name is indecipherable) handwrote.

The pertinent data on Wertheimer’s death certificate are:

1) Wertheimer passed away in the Cedars of Lebanon hospital at 4:42 a.m.

2) He died from acute monocytic leukemia, diagnosed six months earlier. His obituary in the Los Angeles Times noted “he had been in failing health the last two years” and his wife Bertha flew in from the couple’s Michigan summer home to be by his bedside” (July 21, 1958).

3) Wertheimer’s physician provided medical care to him for seven years, since 1951. He also provided care to Wertheimer’s brothers Lou and Al and filled out and signed their death certificates.

4) The doctor last saw Mert Wertheimer alive the day before his demise.

5) An autopsy was performed, and the findings were  used to determine the cause of death.

6) At the time of death, Wertheimer was living in Reno’s Riverside Hotel but had been in Los Angeles County for 13 days beforehand. Why was he there, to visit family and/or friends or for a medical appointment because he’d been feeling unwell? Or had he been lured there on a false premise?

Many of the above death certificate facts could’ve been verified easily with a check of Wertheimer’s medical records. As such, it’s highly unlikely, though remotely possible, his physician doctored records and the death certificate. If he did, it was at the risk of losing his medical license and career, going to prison and paying a hefty fine.

Question of Motive
At the time of Wertheimer’s death, Graham was 69 and had been out of the Northern Nevada gambling scene for three years.

Wertheimer and his partners held a 10-year lease on the Riverside Buffet, which they negotiated during a sale of the property in January 1958, six months before Wertheimer’s death.

If Graham had Wertheimer killed, why? Did Graham dislike, envy or have a grudge against him? Did the two gamblers have a longstanding rivalry? What was the point of rubbing out Wertheimer when he was 74 and ill?

Final Determination
After considering the available evidence and information, It Really Happened! deduced that Mert Wertheimer died of natural causes.

In defense of this conclusion, we argue that pulling off a murder and a cover-up secretly and successfully required perfect execution of all of the various steps involved, and that seems improbable. It would’ve needed more than just Wertheimer’s physician to be involved, and it’s unlikely numerous parties kept quiet and for so long. It’s hard to fathom that in perpetrating the cover-up, a physician risked so much and on behalf of the person(s) responsible for the murder.

Tell A Lie Once…
So who lied, Fratianno or Graham? And to what end? Was Fratianno trying to ingratiate himself with Giancana, who revered Graham, with this boast about Graham? Did Graham want Fratianno to think he’d ordered the killing?

Why did author Demaris include this misinformation in his book without at least qualifying it? (Fratianno sued Demaris for allegedly misquoting him in The Last Mafioso, yet at another time, admitted he never read it.)

If it was Fratianno who lied, it calls into question his credibility, which has greater implications. This is because after he became an FBI informant in 1977, he testified against numerous Mobsters, gamblers among them, and his insider testimony helped get 26 La Cosa Nostra members and 11 associates convicted.

What do you think, was Wertheimer murdered or did he die naturally? If the latter, why would Graham or Fratianno lie about it?