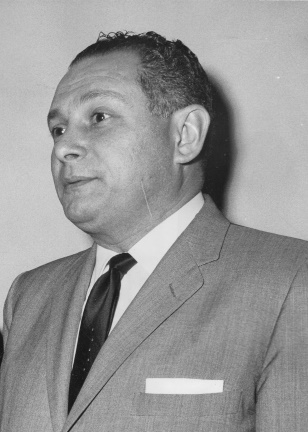 A Miami, Florida businessman and convicted felon, involved with at least one Nevada casino in the 1960s, later got special consideration from President Richard M. Nixon.

Gambling History
Calvin Kovens bought The Sierra Tahoe hotel-casino in 1966, defying Nevada gambling authorities’ order that he not become involved with the resort. He acquired the property with a James “Jimmy” Riddle Hoffa-approved loan from the Central States, Southeast, Southwest Areas Pension Fund of the International Brotherhood of Teamsters.

Having debuted in 1964, The Sierra Tahoe comprised a set of buildings, one on Lake Tahoe’s shore, the other across the street, in Incline Village. After several iterations, the property became the Hyatt Regency Lake Tahoe Resort, Spa and Casino.

Kovens made an undesirable gambler, in the eyes of the Nevada Gaming Commissioners, as he was Mafia connected, was twice convicted of crimes and was due to serve prison time pending appeal. Though he couldn’t get a Silver State gambling license as a result, he remained the landlord of The Sierra Tahoe for three years. (During that time, he renamed the hotel Lake Tahoe Hotel, and lessor of the casino Arthur “Art” L. Wood renamed the gambling house Incline Village Casino.)

In 1968, the Nevada Gaming Control Board suspected Kovens had a hidden interest in the Carousel Casino in Las Vegas. He denied it, and the agents couldn’t prove it.

Criminal Background
Born and raised in Baltimore, Maryland, Kovens served in the U.S. Army during World War II and moved to Miami in the early 1950s. Later in the decade, he launched two commercial real estate businesses: Ruedd Inc., a development company, and Cal Kovens Construction Corp., a building firm.

In 1962, he was fined $12,000 ($103,000) and placed on probation for loan fraud. He’d used Federal Housing Administration financing earmarked for a Miami shopping center for other purposes.

Subsequently, he became an expediter for the Teamsters pension fund. In 1964, he, as well as Hoffa and six others, was found guilty of mail fraud (five counts) and wire fraud (one count). The group had been providing false or inflated information to obtain loans as well as requiring and pocketing kickbacks. Kovens was sentenced to three years in federal prison and a $5,000 ($42,000 today) fine. (Hoffa got five years and a $10,000 fine).

Tit for Tat?
After remaining free for seven years, Kovens began his three-year stint at the minimum security Federal Prison Camp, Elgin in Florida. After his first parole request was denied in June 1971, he allegedly came down with a fever and “symptoms of heart difficulty,” for which he was hospitalized (Sunday Gazette-Mail, June 16, 1974).

Consequently, in December, the parole board, in a unanimous vote, granted Kovens the early release date of May 1, 1972 due to his supposed medical condition. By then, he would’ve served 15 months.

About a week later, former Senator George A. Smathers (D-Fla.) intimated to Charles “Chuck” W. Colson, White House office of public liaison director, in a phone conversation that Kovens should be freed., Smathers relayed to Colson the following dialogue he’d had with Charles “Bebe” G. Rebozzo, a close Nixon friend (The Breaking of a President, 1975):

Smathers: “Bebe, It looks to me that this would be a pretty good thing to do. [Kovens is] the most popular Jew in Dade County, South Florida. … This I know would at least give the president, and those who are going to help in this area, a very strong basis for going to the Jewish community and saying: For God’s sake, the one guy that went to bat for him was the president.”

Smathers: “I agree. There’s no negatives on this; it’s all pluses. … I’m sure the president can do it, and I’m sure, actually, [parole board] Chairman George Reed would probably approve of it.”

Colson sent to White House Counsel John Dean a transcript of this phone call with Smathers with the note: “The attached is much too hot for me to handle. … Obviously, [Smathers] makes a very good point, and I would assume if there is anything we can do properly, we should. On the other hand, in view of the personalities involved here, I would think this has to be handled with extreme care.”

“The past and present chairmen of the parole board in Washington denied contact or behind-the-scenes pressure in the release of Kovens,” reported The Daily Review (April 9, 1974).

Referring to this secret donation and financier Robert L. Vesco’s $200,000 cash payment, columnist Andrew Tully wrote, “If you think these cash transactions have a Mafia flavor, you said it, I didn’t” (Albuquerque Journal, Oct. 9, 1973).

A new law required that Nixon disclose all campaign monies he’d received and from whom, however, he left Kovens’ $30,000 off of the list.

End of Life
The ex-convict lived another 23 years as a free man, until February 1995, when he passed away, not from cardiovascular disease but from complications related to myelodysplastic syndrome, a type of bone marrow disease that may evolve into cancer. He was 70.