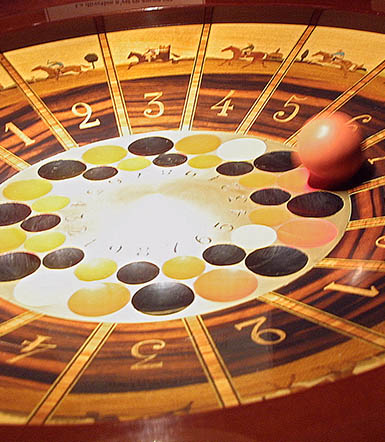 Casinos Barrière features this boule bowl at its gambling houses

Signature: This game resembles roulette but uses a bigger ball and fewer numbers (nine). The name, “la boule” in French translates into “the ball” in English.

Origination: This game was created in 1923 (about two hundred years after roulette was) by a gambling industry insider in an attempt to create a game simpler than roulette and one to replace petits-chevaux, which  had fallen out of favor.

Boule subsequently grew in popularity in several countries in Europe, Southeast Asia along with the Canary Islands, the Cantons of Switzerland and New Caledonia.

How It Works: Players guess which number and color the ball (which is of racquetball size) will stop on in the bowl, or wheel. Once bets are placed on the layout, the bouler (not croupier) spins the ball, and it lands in a pocket, the winning pocket.

The yellow number 5 functions like the zero in roulette; if the ball lands on 5, all even-money bets lose instantly.

Current Status: Boule still can be played today in some casinos in France and Macau. 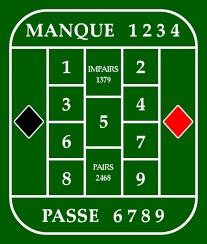