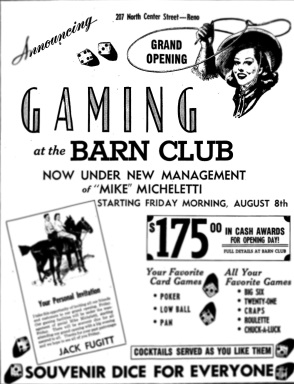 It began in December 1940, when Jack Fugitt, an entertainment machine business owner, and Walter Oswald, assumed the lease of the Northern Club in Reno and remodeled and reopened the place as the Barn Club. It was located at 207 N. Center Street.* “The club had a bar, gaming tables, pinball machines, and numerous other amusements,” described Dwayne Kling in The Rise of the Biggest Little City.

The Northern Nevada gambling house got expanded recognition through the owners’ sponsorship of the local baseball team in the Sierra Nevada league, as it, too, was called the Barn Club, formerly the Reno Club.

New Games Operator
It’s unclear why, but in August 1941, Otell Micheletti, who went by “Mike” and was from San Francisco, California took over running the gambling component. Soon after, he purchased the gaming concession from Fugitt for $23,000 (about a $386,000 value today), and offered poker, pan, 21, craps and slots. Prior to this endeavor, Micheletti had managed circulation of The Examiner (San Francisco), the San Francisco Chronicle and several other Bay Area newspapers.

Uncooperative With Authorities
The Barn Club immediately got into trouble with the Washoe County licensing board, which had given it 15 days to hang curtains on its street-facing windows and move back its gaming tables from the front of the business or face losing its gambling licenses. This mandate, applicable to other casinos as well, was to counter the perceived effect of the gambling houses making the streets look like a ‘Hollywood carnival’” (Nevada State Journal, Sept. 21, 1941).

The owners didn’t comply. The board — comprised of the county commissioners, sheriff and district attorney — rescinded the casino’s gaming permits, and deputy sheriffs closed the gambling there.

Three days later, a Barn Club representative, George Green, requested restoration of the licenses. The board members agreed to it, provided the management alter the front as requested and have its employees fingerprinted. To try to purge and keep ex-convicts and other “undesirable persons” out of the local gambling operations, the licensing authorities, the next day, made official the directive for fingerprinting of all industry workers in the county.

The Barn Club met both stipulations; fingerprints were taken of 70 staff members.

Money, Money, Money
In October, Micheletti stopped paying Fugitt the monthly rent for the space. (Fugitt would sue the Barn Club owners in June 1943 for 10 months’ worth of unpaid rent.)

In February 1942, two different lawsuits involving Fugitt and Micheletti came to light. Since purchasing the gambling concession from Fugitt, Micheletti had tried to withdraw from the bank the $23,000 he’d deposited for the acquisition. When he couldn’t, he sued Fugitt to recover the money, on unknown grounds. Fugitt counter-sued and won that battle; the judge ordered Micheletti to pay Fugitt the full amount.

On August 14, Micheletti, along with two co-owners, “Larry” Brady and Irving Cowan, held a grand opening for the Barn Club. (By this time, the original co-owners Fugitt and Oswald had sold their ownership interests, which Cowan eventually had assumed.)

Brady, who sometimes went by William Lawrence Brady but whose real name was William Lawrence Hunger, had gotten paroled in 1937 from Folsom State Prison on felony charges and, previously, had served a term at the Preston School of Industry, a California youth reform institution.

Irving Cowan may have been the Irving Cowan who had a long rap sheet and was associated with Los Angeles mobster, Mickey Cohen, but this remains unverified.

If the requisite county-required fingerprinting was being done, how did Brady, and possibly Cowan, end up as co-proprietors of a gambling house?

In November, Cowan was arrested at the Barn Club for assault and battery. Ten days later, federal officers arrested Brady after he brandished a gun in the Barn Club during an altercation. He was charged with carrying a firearm across state lines (between California and Nevada).

By late 1943 and perhaps earlier, the Barn Club was shuttered.