Brazilian Game of Chance Starts as a Business Promotion 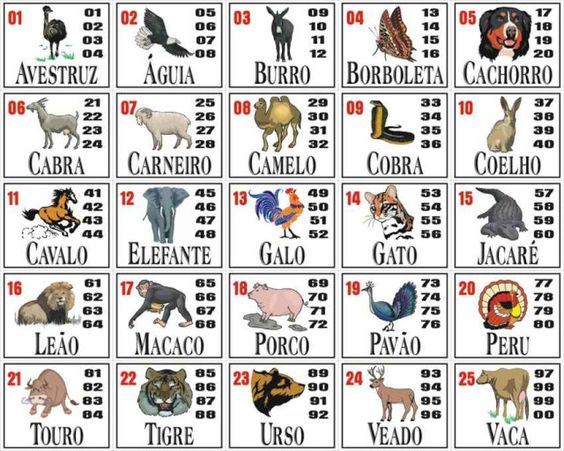 A way to drum up business for a failing zoo in the late 19th century, reportedly, quickly evolved into and, to this day, remains an enormously popular game of chance among Brazilians: jogo do bicho.

In 1884, Rio de Janeiro businessman João Batista Viana Drummond (1825-1897) purchased what remained of the Fazenda dos Macacos (Monkey Farm) in what today is the city’s Villa Isabel district. There, he established a zoo and debuted it in 1888.

Sometime after, supposedly, the government stopped subsidizing the enterprise. This left the owner needing a way to boost revenue to generate the cash required to keep the zoo open.

Gambling on the Animals

To lure patrons to the zoo, Drummond created and instituted an enticement. When guests paid the entrance fee to the attraction, they were given a numbered ticket. Each number corresponded to one of 25 animals (see photo), their image also on the ticket.

Every day, the entrepreneur placed a small replica of one of those creatures, hidden under a cloth, at the top of the zoo’s front gate. At closing time, Drummond unveiled it, and the ticketholder(s) with the number linked to that day’s animal won a prize.

The Game Blows Up

The concept of what became known as the “game of animals” — jogo do bicho in Portuguese, and bicho for short — took off both at the zoo and outside of it, in Rio de Janeiro and beyond in Brazil. Throughout the seaside city at least, bankers, known as bicheiros or banqueiros, often Mobsters, ran the lottery-type game, in cafés and offices and on street corners. Players were numerous and came from all walks of life.

“Bicho is played by all classes, from millionaire to beggar, matron to housemaid,” reported The Saturday Spectator in 1934 (March 24).

Like Drummond’s promotion, players won by backing a bicho, which involved betting on one, two, three or all four of its corresponding numbers. They could wager any amount from a half-cent up. A drawing occurred daily at the same time as the federal lottery, though the two weren’t linked officially.

“Bicho players work on hunches,” explained The Saturday Spectator. “For example: If one has eaten cheese before going to bed and dreamed of snakes, next morning surely one must back the snake to win. Or if one is bumped in the street by an automobile, the number of the license is promptly copied by all those around the accident and that number played on the bicho. Or if, in passing a house, a roof tile falls on one’s head, instead of calling for an ambulance one runs to the bicheiro and plays on the number of the house.”

The newspaper article continued, “Historical personages also have their bicho nomenclature. When dreaming of Darwin, play the monkey; Napoleon, the eagle; and of Mme. du Barry, the butterfly.”

When the City of Rio de Janeiro legalized certain games of chance in 1934, jogo do bicho wasn’t among them. That, however, along with efforts to eradicate the game — such as fining bankers sums as high as $2,500 ($45,000 today) and kicking them out of town — didn’t stop its proliferation and increasing popularity.

“At times a police squad makes raids and suspected bicho speakeasies are closed, only to reopen again elsewhere,” The Saturday Spectator described. “They grow up over night, like mushrooms, and there are hundreds of itinerant bicho vendors combing the streets.”

“Drummond piled up a fortune. His system was unbeatable,” reported The Lowell Sun (Dec. 4, 1947). “The children flocked to the Villa Isabel’s zoo to see the galaxy of 25 well-chosen animals, but their parents and brothers and sisters came to play the adult animal numbers game.”

Drummond’s displayed animal collection remained open for more than a half-century, closing in the 1940s, long after his death in 1897.

As for jogo do bicho today, in Brazil, the federal government and 25 states ban it; it is legal only in the State of Paraíba. However, this game of chance endures as a beloved pastime.

For instance, in 2019-2020, jogo do bicho was one of the 25 topics Brazilians searched for the most online, according to data analyst, Polli Cavalcanti. Among gambling subjects searched for, jogo do bicho far surpassed the newer online offerings of eSports, GTA, Fortnite, League of Legends and Counter-Strike.

“The ‘jogo do bicho’ continues to attract the attention of more people than anyone could imagine,” Cavalcanti wrote.

Why do you think such a simple game of chance has been and is so popular in the South American country?