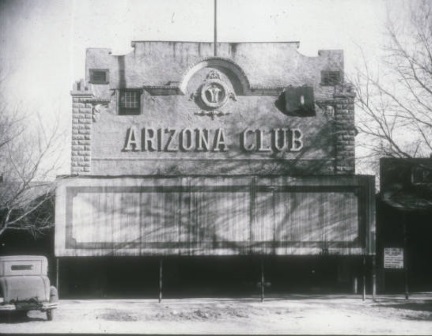 Imagine in the early 1900s, a block about the length of a football field, in the Mojave Desert in Nevada where gambling, drinking and prostitution prevailed free from law enforcement’s intrusion, and where fights erupted often and killings were common.

And because the days were so hot, it came alive at night when locals and passers-through pursued their vices and recreation, including billiards, bowling, music and dancing.

Such a place existed — the original Sin City.

“That part of Las Vegas looked like a rip-roaring, whiskey-drinking, gun-toting, gambling town, while the rest of the town was conservative and business-like,” wrote Stanley Paher in Las Vegas: As It Began—As It Grew.

This frontier area developed in 1905 after William Clark, who with his brother developed the San Pedro, Los Angeles and Salt Lake railroad, founded the Las Vegas Townsite. He divided 110 acres into 38 parcels of land, each 1,200 square feet in size, which he auctioned. He designated only two of those — Blocks 16 and 17 — as places where liquor could be sold legally. Properties on the other blocks contained a “no liquor” clause in their deed.

Block 16 was located on today’s First Street between Ogden and Stewart avenues. While prostitution primarily was limited to that area and with the free flow of alcohol there,* Block 16 alone earned the name Sin City. The early brothels were located in the rear or upper rooms, or “cribs,” of some of the saloons.

“… riotous Block 16 was the only seat of pleasure. Nearly every night, including Christmas, it ran full blast. The Gem, the Red Onion, the Turf, the Favorite, the OO (Double-O), the Star, the Arcade saloons and the Arizona Club were continually crowded with sharp-eyed dealers and boosters and men standing around trying to solve the mysteries of gambling. All night long sounded the strains of music, the rattle of ivory chips and the clink of silver and gold coins on the tables of faro, roulette, craps, black jack and poker,” Paher wrote.

Tolerance Fades
In the early 1940s, the U.S. Army Air Corps (now the U.S. Air Force) was considering an area outside of town for base facilities for an aerial gunnery school and told city officials that as long as Block 16 existed, servicemen wouldn’t be allowed to enter Las Vegas. Afraid of losing the potential economic windfall from those corpsmen, the city began eradicating Block 16 in 1941.

Law enforcement conducted a series of raids, during which they arrested numerous prostitutes. In 1942, the city revoked all gaming and liquor licenses of Block 16’s businesses. Consequently, income from these vices decreased, and proprietors soon after ceased operations, thereby killing off Sin City.

The facilities, particularly the brothels, later were used through the duration of World War II as inexpensive rooming houses until 1946, when the city deemed them inhabitable and razed them. The land eventually was paved to serve as parking lots, and it still does. They can be found behind Binion’s Gambling Hall & Hotel and just east of the California Hotel-Casino, in the heart of downtown Las Vegas.

*Even during Prohibition, alcohol was available widely on Block 16.