Americans’ Crime and Punishment in England 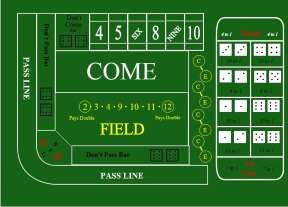 For a week in May, the leader of a group of U.S.-based gamblers rented the Villa Casino, which overlooked Hyde Park in West London, along with two craps tables, the latter for $2,500 (about $17,000 today) and 10 percent of the profits.

They offered a gambling trip to England for $960 ($6,500 today) for roundtrip air fare, a week’s hotel accommodations and $960 worth of chips. Such packages, or junkets, to that country had been popular. Travelers paid one amount for airfare, meals and lodging but individually covered all wagers beyond the allotted amount.

The gambling syndicate’s guests, 40 American high rollers, mostly from the Boston, Massachusetts area, flew into town by charter on Monday, May 12.

Suspicious Activity
During the many games of craps the vacationers played, the croupiers, at crucial points, swapped the dice for misspot ones, in this case dice with two sides bearing the same number of spots. One of these dice men was Clayton P. Gatterdam, a 48-year-old ski school proprietor from Fort Worth, Texas. Gatterdam* was a reputed crossroader, a hustler who traveled around, cheating others at gambling for money.

Caught Bang to Rights
On Thursday at around 1 a.m., police burst into the pink, cottage-style building and arrested seven of the hosts. They were charged with involvement in the management and organization of unlawful gaming and conspiring to cheat and defraud. Gatterdam was charged also with possession of seven pairs of misspot dice. (Gambling was legal in England at the time, but cheating by those who ran it wasn’t.)

Undercover police agent and gambling expert, Detective Constable Brian Gillard, 26, had infiltrated the Villa Casino crowd and had watched the games for days before requesting the raid. It’s unknown how initially he’d become aware of the shady goings on.

Intended to Swindle
In a preliminary hearing the following Wednesday, the seven arrestees pleaded innocent. The magistrate agreed to bail of 15,000 pounds, or $36,000 ($247,000), apiece provided they give their passports to police and check in with them daily.

“The bail is the highest set in London for some time,” reported the Orlando Sentinel (May 16, 1969).

At their trial in mid-July at Old Bailey, officially called the Central Criminal Court of England and Wales, all of the defendants pleaded guilty. They admitted to having conspired between April 1 and May 15 to obtain property belonging to others dishonestly through deception with dice in craps games. They also admitted to being involved in conducting games in such a way that the odds weren’t favorable to all players equally.

* About 1.5 years earlier, in October 1967, Nevada Gaming Control Board agents caught Gatterdam using misspot dice in craps games while working as a stickman at the Incline Village Casino at Lake Tahoe.