Mobsters Marshall Caifano (aka Johnny Marshall) and Charles Delmonico were arrested in Las Vegas on a federal warrant in July 1963 for conspiracy to commit extortion and engaging in interstate transportation in the aid of racketeering.

The latter charge was because the two supposedly schemed in California to commit the crime and then tried to finish carrying it out in Nevada. The two pleaded innocent and were released on $20,000 bond apiece (about $165,000 today).

Caifano/Marshall (born Marcello Giuseppe Caifano), age 54, had been listed in Nevada’s Black Book of personae non gratae in the state’s casinos since 1960. He was a prime suspect in several murders in Chicago, Illinois, his stomping grounds before Las Vegas. 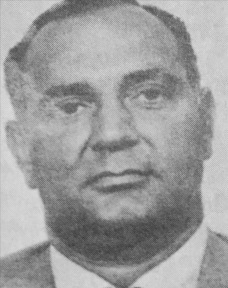 Delmonico, age 36, was actually Charles “Chuck” James Tourine. He was the son of Genovese capo Charlie “The Blade” Tourine, a former gambler in Las Vegas and Cuba.

The mobsters’ target was Raymond “Ray” J. Ryan, wealthy head of the Ryan Oil Co. in Evansville, Indiana, owner of the El Mirador Hotel in Palm Springs, California and a high-rolling gambler.

The Alleged Crime
The story, pieced together from various newspaper accounts, Caifano/Marshall and Delmonico picked up Ryan at the El Mirador on April 30 and drove off. Ryan, unfamiliar with the men, had vetted them through his friend John S. Drew, then the co-owner of the Chicago Outfit-owned Stardust in Vegas, but also had two of his hotel employees trail the mobsters and Ryan in another car.

In the back seat with Ryan, Caifano/Marshall demanded he pay him $15,000 and $60,000 in short order and then $60,000 each subsequent year. The first amount was to settle a supposed debt to high roller Nicholas “Nick the Greek” A. Dandolos resulting from a poker game Dandolos and Ryan had played 15 years before, in 1949. The annual $60,000 was protection money, as the Outfit had averted Ryan getting kidnapped in the past, for free, it claimed, but not anymore.

Delmonico hit Ryan in the chest to emphasize the mobsters’ message. Yet Ryan said he wouldn’t give them any money, and they argued. Eventually, though, they let him go because he had a flight scheduled later that day to Las Vegas.

On May 1, in Ryan’s Desert Inn hotel room, Caifano/Marshall told Ryan they were going for a ride in the desert because Ryan hadn’t forked over any cash. The mobster forced Ryan into the hallway, where he spotted Delmonico and Dandolos. The oil tycoon made a run for it, shielded himself behind a full luggage rack, got to the lobby and had a security guard contact the authorities.

Facing the Heat
Caifano/Marshall and Delmonico’s trial began in Los Angeles in January 1964, with Thomas Sheridan, assistant U.S. attorney in charge of the criminal division for Southern California, prosecuting the case.

Dandolos, 81, testified that he and Ryan had known one another for 32 years and often had played cards together, for as long as five consecutive weeks at a time, with some games lasting five or more hours.

The supposed debt, Dandolos said, had stemmed from an August 1949, lowball poker game by the pool at the Flamingo or the Thunderbird in Las Vegas (reports differed on this point), during which Ryan allegedly had cheated him out of $550,000 ($5.8 million today). He claimed Ryan had used a shortwave radio to learn what cards Dandolos had either from someone who could see them somehow via a set of mirrors or from someone on the roof with a telescope (again, reports varied). (The money Dandolos had played with in that game supposedly had been put up by Chicago high rollers, thus, Ryan’s allegedly swindling the bundle from Dandolos enraged the Outfit.)

Was Dandolos willingly in cahoots with the mobsters for some reason, perhaps because he needed money? Or were the mobsters using Dandolos to scam Ryan out of thousands of dollars?

Strange Twist
On the tenth day of the trial, Dandolos files a lawsuit against Ryan for $1,572,000 ($12.8 million) in damages and in which he charged Ryan had welched on the $524,000 he owed him from that 1949 rigged lowball poker game. Why hadn’t Dandolos filed the suit sometime during the past 15 years? Had the mobsters forced him to do so during their trial?

One witness, Lonnie Joe Chadwick, who Ryan claimed knew of the extortion attempt, was called by both the prosecution and defense. In a secret meeting in the judge’s chambers, Chadwick pleaded the Fifth Amendment.

The defense’s position was that Ryan had cheated Dandolos out of $555,000 during that 1949 poker game, as Dandolos has testified, and that neither Caifano/Marshall nor Delmonico had extorted or threatened Ryan to squeeze money out of him. Rather, they were simply trying to collect on a bad debt. In fact, the defendants, on the stand, denied trying to shake down Ryan and said they just were trying to get him to pay back Dandolos.

The defense also asserted that Ryan had contrived the extortion events to avoid making good on what he owed.

Jury and Judge
In February, the jury of nine men and three women found Caifano and Delmonico guilty.

The Fatal Postscript
Thirteen years after the trial, Ryan was murdered. On Tuesday, October 18, 1977, he left his neighborhood exercise club in Evansville after a workout and in the parking lot, got into his Lincoln Continental Mark IV, which then exploded into pieces.

The case went and remains cold, but the theory was advanced the Chicago Outfit had ordered the hit on Ryan in retaliation for him cheating Dandolos in that 1949 card game and for him snitching on Caifano/Marshall and Delmonico in 1963.

Featured photo from freeimages.com: Cards and Chips 3 by Chris Wrightson