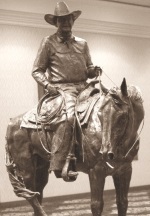 Although Texas-born Lester B. “Benny” Binion (1904-1989) no longer is with us, he remains a legend among Las Vegas casino owners and operators — gamblers, in industry parlance.

Iconic even in his appearance — large in girth and ever clad in a cowboy hat and boots — Binion was complex. The dichotomous traits he embodied likely helped him attain success; he was charming yet cruel, a family man yet a criminal, and minimally educated (through the second grade) yet savvy in business.

“For those who understood the real game being played in Las Vegas and America, Benny was one of the most influential, and feared, men of his time; and in that enormous power, if not in his crude style, he set an example,” wrote Sally Denton and Roger Morris in The Money and The Power: The Making of Las Vegas and Its Hold on America.

Binion is remembered for owning and operating the Horseshoe Club in Southern Nevada and allowing players to place high-stakes bets on craps at a time when other gambling houses wouldn’t. He also launched the famed World Series of Poker tournament in 1970.

Down and Dirty Details
That’s the part of his story that prevails. Here are 10 lesser-known facts about Benny Binion:

1) He was an FBI informant for a time, providing the governmental agency with the inside scoop about various Las Vegas gamblers and their enterprises.

2) He murdered at least two men — Frank Bolding, a man whom he suspected of stealing liquor from him during his bootlegging days, and Ben Frieden, a competitor in the policy racket in Dallas, the latter slaying earning him the nickname “The Cowboy.” He wasn’t ever charged for the killings. Despite admitting both to Nevada gaming regulators, they granted him a gambling license.

3) His gambling start was running a lucrative numbers operation in Texas.

4) He couldn’t read, write or do basic math.

5) His father was a drunk and excessive gambler, and his brother, Jack, died in a plane crash at age 23.

6) He was openly racist toward African Americans.

7) He secretly brokered the funneling of millions of dollars from prominent Dallas bankers to Las Vegas mobsters and took a 5 percent cut for his services. One such transaction was $500,000 (about $5.1 million today) that Republic Bank provided to Moe Dalitz, the Cleveland mob’s representative in Sin City, for construction of the Desert Inn hotel-casino.

8) Following a drawn out extradition battle and legal wrangling that went to the U.S. Supreme Court, he served 3.25 years, from Dec. 1953 to March 1957, in the U.S. Penitentiary Leavenworth in Kansas on federal charges of tax evasion and state charges of illegal gambling,

9) After his release from prison, he sold the remaining, non-mob-owned interest of the Horseshoe to mobster Meyer Lansky and associates through their front man, Ed Levinson, because Binion needed money to pay past taxes (eventually, he bought back 100 percent of the casino).

10) He applied for a presidential pardon five times but wasn’t granted one.