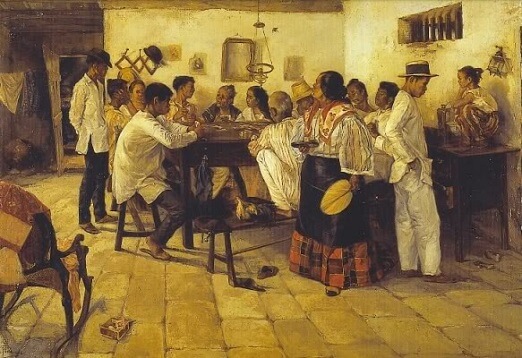 Signature: Panguingue, or pan for short, is a rummy-type gambling card game. In fact, it descends directly from conquian, the patriarch of all rummy games. Pan calls for six, seven or eight players ideally but any number may play. Chips are used for wagering and scorekeeping.

Origination: Panguingue is thought to have originated among the Tagalogs, natives of the island of Luzon in the Philippines, during the country’s Spanish period, between 1565 and 1898.

Spread to U.S.: Pan was staple of the gambling halls during the Californian gold rush in the mid-1800s and made its way to Nevada, Arizona, Washington and other western states.

The game often was played to pass the time, in bordellos, for example, by ladies of the evening while waiting for customers, and in gambling and pool halls, by laborers away from home.

It reportedly was in those prostitution houses that a unique, sexually suggestive lingo for pan developed. For example, “getting down” refers to placing a bet. The “tops” are the penalty chips players pay for opting not to play a round; the tops go to the round winner. “Being peckered,” is when a player, during a round, can’t make a play called a wagon (two of three cards in a spade valle card meld — see below for explanation) with a matching spade.

In Nevada, panguingue occasionally was found in the casinos throughout much of the 20th century, according to David Schwartz, author of Roll The Bones. In California, the Anti-Gambling Act passed in 1860 outlawed all games of chance in which bets are placed against a house, bank or dealer. Thus, panguingue was and, since, has been allowed.

Generally, though, pan didn’t catch on in the States to the same extent of its cohorts — faro, poker and blackjack/21. That may have been because some games of chance players found it boring.

“Panguingue, to some persons, is a dull and deadly game. Many do not see anything to get excited about, at least from a gambling angle,” The Spokesman-Review noted (Feb. 1, 1935).

In Culture: The game is said to have been first recorded as part of American lexicon in 1905, in the Dictionary of American Regional English.

Another early reference, according to a Miami Herald columnist (Aug. 19, 1945), was in the 1910 book published in Manila, When the Krag is Laid Away, by Chancey McGovern. The passage read: “… when the mujer of the house was too busily preoccupied with the intricacies of panguingue [sic]. (The Filipina woman’s national game. As much as ten cents is lost by some unfortunate housewife in a single afternoon’s playing.)”

Typically in the U.S., the same number of 52-card decks were used but the 8s, 9s and 10s were removed so they included only and all ranks equivalent to those in a Spanish deck.

The number of decks used, however, could vary, often by locale. In the state of Washington, for instance, 10 was the norm.

Sometimes, players removed additional suits from the decks to change the odds. Along with the 8s, 9s and 10s, they may have excluded one suit of spades, one suit of spades and the 3s, 5s and 7s, etc. Historically, throughout California, for example, eliminating two suits of spades from each deck was common.

How it Works: Each player antes up 1 chip.

Rotating to the right (versus the more common left), each player is dealt 10 cards, 5 at a time. The remaining cards are placed face down, forming the draw pile. The top card is flipped over, face up, next to the draw pile, to start the discard pile.

Next, every player, again to the right, decides to stand (play) or drop (fold). The droppers forfeit their ante, pay the tops and place their cards at the bottom of the draw pile.

The game objective is to create melds with one’s cards. The first player to meld 11 cards wins the round. 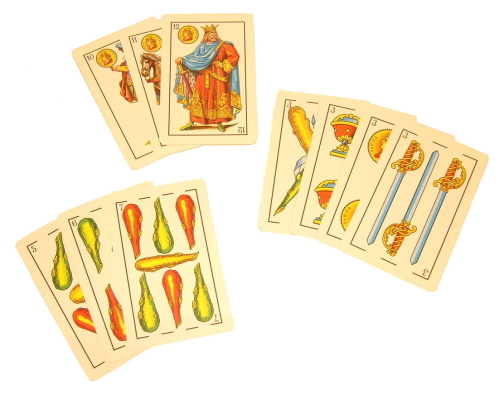 If the player chooses a card from the discard pile, it must be added to an open meld. Otherwise, it must be discarded.

On every turn, players must discard a card so they always have exactly 10 cards in hand, except on a winning turn when they must have 11.

When a player wins a round, he/she collects the tops, the pot and chips from every other active player according to these conditions:

For meld of valle cards in the same suit: 4 chips for spades, 2 for others

For melds of non-valle cards in the same suit: 2 chips for spades, 1 for others