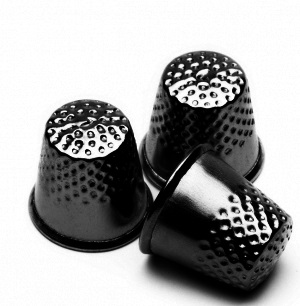 Signature: This game of skill can be identified by its three overturned receptacles (originally thimbles but later, metal cups , walnut shells or the like) and a small object (a cork pea, rubber ball or other) for hiding.

(Known as the King of the Thimbles and the Napoleon of the Thimbleriggers, he was believed to have made a fortune from playing the game on steamboats traversing the Mississippi and Red Rivers.)

Thimblerig is the only gambling game of any renown with a purely American heritage, although it’s essentially the same as Mexican three card monte (played with, well, cards). Thimblerig is also known as the shell game, three shells and a pea and the old army game.

How It Works: The bettor guesses which cup-shaped receptacle contains the small object after the operator has shuffled around the trio.

Thimblerig often involves sleight of hand and swindling; in fact, the definition of “thimblerig” since the 1800s has been to manipulate or control, generally in deceptive or dishonest ways. “Ten times out of 10,” Herbert Asbury wrote in Sucker’s Progress, “unless the bet was a come-on, it [the object] is between two of the thimble rigger’s fingers, or has been shifted by a confederate during the excitement of the betting.”

Trivia: Soapy Smith, gambler in the late 1800s, is said to have been one of the slyest thimbleriggers in the United States. Earlier, during the Gold Rush Era, William “Lucky Bill” B. Thorington had a successful run with thimblerig in the mining camps and towns between what are now Northern California and Northern Utah.