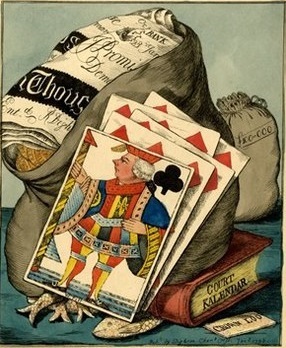 Signature: Though it originated in France, loo became England’s most popular card game by the turn of the 18th century. By 1860, the trick taking game was called lant in Northern England. From this game emerged the verb form of loo, i.e., get loo’d or get looed.

Origination: Originating in France in the 17th century, the name loo derived from lanterlu/lenterlu or looterlu, the word for “fiddlesticks,” a refrain used in lullabies, such as lullay or lulloo.

Loo and the game all fours, from which loo descended, are believed to have been the first card games ever played in the United States, popular in the English-speaking colonies.

How It Works: The three primary forms of loo are three card, Irish and five card. Depending on the version being played, each player is dealt three or five cards and antes up to form a pot.

Players may dispose of their hand at no cost or choose to play, trying to win at least one trick for one-third or one-fifth of the pot.

Any player who doesn’t win is looed and must add to the pot. Looing also happens when a player misdeals or breaks any other of the game’s many rules.