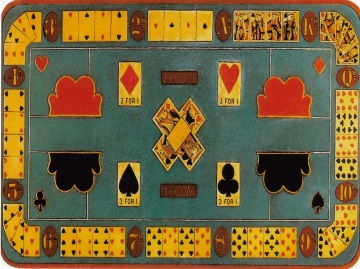 Signature: This game, related to faro, was notable for its own, flashy layout and use of two 52-card decks. It sometimes was referred to as red and black.

How it Works: The banker deals five cards on the table, face down. Players would make various wagers. They included betting on high or low or red or black at even money. They could bet on a suit at 3:1, on any one of a kind at 8:1 or on a single card at 32:1.

Current Status: “It didn’t take players long to figure out that the game was a no-win situation for them and … it soon vanished from the scene,” wrote G.R. Williamson in Frontier Gambling.