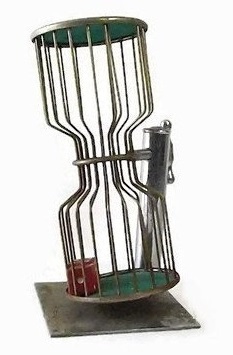 Signature: This quick, exciting game of chance is easily identifiable by the sizable (18 inch high) wire cage, resembling one that houses bird(s) excluding its hourglass shape, which is used to shake three oversized dice.

How It Works: Players bet on the possible combinations the dice may show, marking their predictions on a layout containing the numbers one through six. The banker flips the cage several times, thereby “rolling” the dice, which subsequently come to rest and display the winning combo.

The payoffs generally are 1:1 for singles, 2:1 for pairs and 3:1 for triples. For instance, if a player places a bet on three, and two threes appear on the dice, the player is paid at 2:1. However, the game’s odds favor the house, whose edge is 7.5 percent, higher than most other casino games.

Origination: Chuck-a-luck is said to have begun in English pubs as Sweat Cloth or, because the objects each were depicted on a dice side, Crown and Anchor. The game appeared in the United States around 1800, simply as Sweat. During the middle and late part of the 19th century, it came to be called Chucker Luck, Chuck-Luck and/or Chuck. By 1900, the names Chuck-a-luck and Birdcage stuck.

Chuck-a-luck was derived from Grand Hazard, both of which are variants of Sic Bo. All three—Sic Bo, Grand Hazard (or simply Hazard) and Chuck-a-luck are considered a precursor to craps.

Current Status: Chuck-a-luck can be spotted occasionally in some casinos, at carnivals and at fundraising events.

Trivia: In the 1974 James Bond film, The Man with the Golden Gun, the character Lazar plays chuck-a-luck.