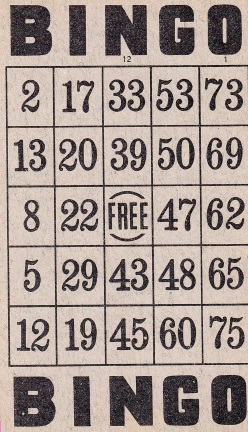 Signature: The game is known by winners yelling “bingo” or “house.”

Origination: The game extends as far back as 1530 to a lottery Italians played called il gioco del lotto d’Italia. Next, it sprang up in France in the late 1770s, where it went by le lotto, was played primarily among wealthy Frenchmen and even introduced at the Casino de Monte-Carlo at some point. It found its way to Britain, where, around 1880, members of the Royal Navy called it tombola, and around 1900, those in the Army, called it house or housy-housy. Bingo has been hugely popular in Japan.

The American form, called keno, kino or po-keno, dates back to the early 1800s. But the version from Europe, began in the U.S. in 1929 as beano because players used beans to mark the numbers on their cards and would yell “beano” if they won. Other American names for bingo have been lucky, radio and fortune.

The story of beano’s evolution into bingo is debated, but consensus seems to be that Edwin S. Lowe, a Polish immigrant living in New York, after learning of beano at a Georgia carnival in 1929, returned home and tried it out on friends. Seeing how much they enjoyed it, he commercialized it under the name bingo. The name is believed to have come from one of his inner circle blurting out the word in excitement upon winning a game.

Lowe hired Carl Leffler, a Columbia University math professor, to help him increase the number of combinations among bingo cards to avoid simultaneous wins. By 1930, the professor had created 6,000 different bingo cards.

How It Works: Players purchase one or more cards containing squares, a number in each. The money goes into the pot. A caller, or banker, randomly selects one number at a time out of some container holding them all, and as each one is pulled, calls out the number. If players have it on their card(s), they mark each instance of it. The first player to mark a complete row, card or other previously determined pattern of numbers shouts “bingo” or “house” and collects the entire pot.

Trivia: At the height of its popularity during The Great Depression, a variation dubbed screeno was played in motion picture theaters. One night a week the cinemas held bank night, on which moviegoers received free bingo cards with their admission ticket.

Current Status: Bingo is one of the most popular kinds of low-priced gambling in the world.