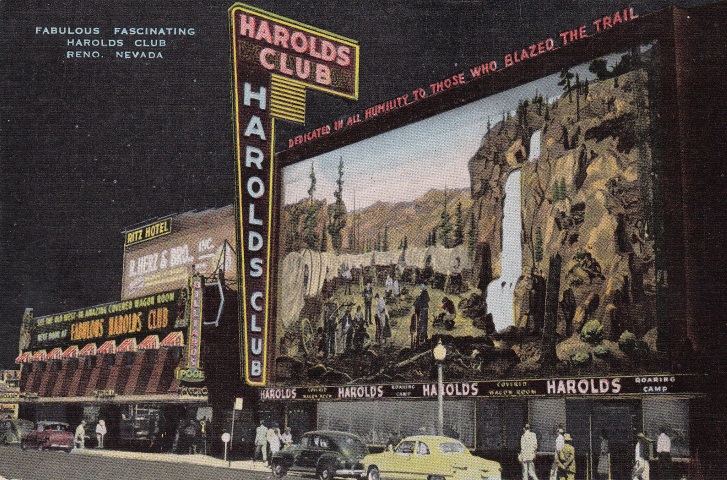 The giant, then-$60,000 mural that once hung over Harolds Club’s South Virginia Street entrance in Reno now stands in front of the Reno-Sparks Livestock Center as an homage to this pioneering Nevada casino. The 70-foot-long, 35-foot-tall painting is vibrant in its depiction of the Wild West and is three times the square footage of a standard billboard. It’s a fitting reminder of how great an impact Harolds Club had on Nevada and gaming.

“It was a wonderful place to be a part of,” says Neal Cobb, a Harolds Club historian and former employee (craps dealer). “[The Smiths] took care of us and the community.”

“It was the most successful, dysfunctional family there ever was,” Neal says, referring to the dynamics between Pappy and Harold Sr., which manifested at the club. Harold was a drinker and gambler; Pappy wasn’t. The two didn’t always agree on club matters, which led to arguments, and sometimes, overruling each other’s directives. 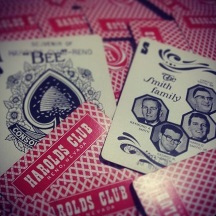 People First, Then Profits
In Harolds, Pappy and Harold Sr. created a fun, friendly place for employees and guests, in part relying on gimmicks to do so. Raymond A. primarily handled behind-the-scenes administrative tasks. Harold Sr., who managed the casino during the swing shift, often wore unusual getups and resorted to wild antics — such as riding his horse into the club or playing his violin over the loudspeaker.

Pappy — considered by many to be the grandfather of gaming in Nevada — occasionally doubled the payouts for customers at random tables. Guests never knew what to expect, and the ambience appealed to the everyday person, not just serious players. Dealers were encouraged to get to know patrons, making them feel as though they were a part of the extended Harolds Club family. 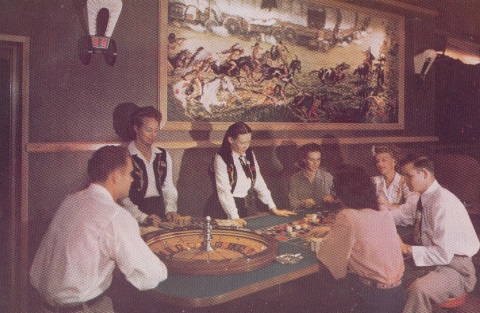 The casino’s generous policies were unprecedented. The Once Only Book, for example, helped those who’d gambled all their money get home. Anyone in that circumstance could get a loan up to $50 (a $500 value today) per year. If they repaid it, they could borrow again. Customers sometimes asked Pappy for the money back that they’d gambled, as they’d spent what they’d needed to live on, and frequently, he refunded them.

The Smiths catered to children as well. In the 1950s, they opened a theater where movies for youngsters were shown. It was so popular, more than 60,000 children visited it each year. The Roaring Camp Room, which housed a sizable museum of Western guns and other artifacts, was open to all ages. The collection was auctioned off piece by piece in 1994.

Along with the patrons, the Smiths treated the employees more like loved ones than workers, truly caring about each one and availing themselves at all times to discuss anything. Some workers even received personal loans from the bosses when they asked. Consequently, the personnel enjoyed their jobs and turnover was minimal, with some staying on for 20, 30, even 40 years. Today, a cadre (72 currently) of former staff members — the Harolds Club Pioneers — meets regularly to socialize and continue the philanthropy for which the Smiths were known. The group routinely raises and donates fund to local charities.

“The Smiths couldn’t do enough for you as an employee or a customer,” says Dwayne Kling, historian, author, and former Harolds Club floor manager. “They’d lean over backwards to give the customer a break. The customer was always right.”

Doing Things Differently
Harolds Club was the first casino in Nevada to hire women to work as dealers, and the customers — male and female — loved it. The first ladies hired in the late 1930s were Smith family members, but by the early 1940s, employment was open to all women, and they numbered nine out of every 10 workers. This radically different approach lent Nevada’s gaming industry a respectability and credibility, which at the time was desperately needed. 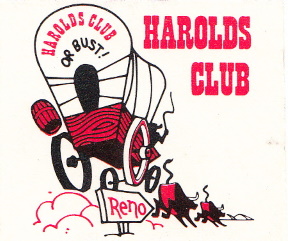 Gambling advertising was illegal at the time, but that didn’t stop Harolds Club. In fact, it launched the industry’s first expansive advertising campaign in the 1940s, which turned the place into the best-known casino in the world in the 1950s. Billboards showed a cartoon-like scene of a character heading for the Reno establishment in a comedic way, like by river raft, with the message: Harolds Club or Bust. At the peak, these enticements appeared in 45 states and worldwide.

“The sign campaign was far more successful than they could imagine,” Neal says.

The Smiths’ seemingly outlandish strategies worked as customers were not only loyal, but flocked en masse to Harolds. During Labor Day weekend 1952, 44,206 people entered the club.

The End of an Era
In 1970, three years after Pappy succumbed to cancer, Summa Corp. (today, the Howard Hughes Corp.) acquired Harolds Club for an estimated $11 million. It introduced new management and rules and abandoned many of the strategies responsible for the resort’s success.

“It definitely was the end of an era,” Dwayne says about Pappy’s passing and the sale. “The whole philosophy of the operation changed completely.”

Eighteen years later, Hughes’ company sold Harolds to the Lincoln Management Group (later, the Fitzgerald Gaming Corp.), which aimed to add a hotel. Unable to obtain a construction loan, however, the operation closed on March 31, 1995. Harrah’s bought the property in 1999, had it demolished, and today uses the site for its plaza.

Dwayne sums up the legacy of the gone but not forgotten casino: “There was never anything like Harolds Club, and there never will be again.”